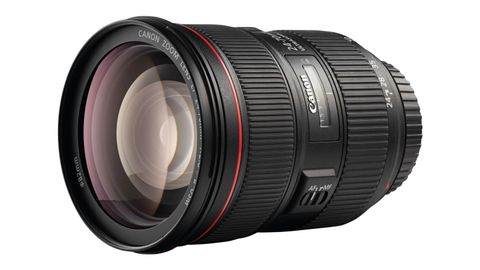 The Canon EF 24-70mm f/2.8L II USM really is an excellent lens – there’s no quibbling with that. It shoots terrific images and its weather-sealing is among the best Canon has ever produced, making it a fantastic choice for landscapes. It is something of a shame, however, that the sharpness and contrast of its images aren’t significantly better than its rivals from third-party manufacturers, which offer similar quality at a much better price.

Covering a useful general-purpose focal range, the Canon EF 24-70mm f/2.8L II is a standard zoom lens that is part of Canon’s L series. Lenses with the ‘L’ designation are known for being extremely high quality inside and out, producing pin-sharp images even in challenging conditions. They're known as the best Canon lenses for good reason.

The original edition of this lens dates back to 2002 but it was extensively revamped in 2012. The ‘next generation’ optical design with three aspherical elements aims for greater sharpness with reduced distortion, colour fringing and colour blur. The number of diaphragm blades was also increased to nine, enabling a better-rounded aperture when stopping down from f/2.8.

Build quality is better than in the original lens, making the Mark II one of the most robust and extensively weather-sealed zooms in Canon’s history. Fluorine coatings are added to the front and rear elements, to repel moisture and grease, and to ease cleaning. Canon expects you to be carrying this lens around all day, in what might not necessarily be the most pleasant of weathers, and it’s designed as such.

One thing that’s still lacking from the design of the Mark II is image stabilisation, and given that standard zooms tend to be used in everyday handheld shooting, some photographers will consider this a major omission. It’s also worth bearing in mind that this lens is significantly more expensive than competitors in the same focal range from the likes of Sigma and Tamron, and these lenses tend to be stabilised. Not a ruinous omission, but a surprising one, to be sure.

Sharpness and contrast are excellent, even when shooting wide-open at f/2.8. However, these aspects of image quality are no better than its third-party rivals such as the Sigma 24-70mm f/2.8 DG OS HSM Art lens or the TAMRON SP 24-70mm f/2.8 DI VC USD G2. Given that both of these lenses can be picked up for better prices, it makes it tough to recommend paying premium for the Canon. Similarly, levels of colour fringing and distortion are similar in all three lenses, although the Canon has less pincushion distortion at the long end of the zoom range. It’s a tough lens but not great value.

As is typical for L-series lenses, the EF 24-70mm f/2.8L II USM is supplied with a hood for keeping out stray sunlight and reducing flare. Its 82mm is very typical of 24-70mm f/2.8 lenses, allowing the user to experiment freely with ND filters, polarisers and similar accessories. Its zoom ring is on the rear, unlike many similar zooms which have it placed nearer the front.

One thing that’s worth noting about the Canon EF 24-70mm f/2.8L II USM is that its weather-sealing is seriously excellent, with a robust construction that makes massive improvements on the original lens in this series. There are also fluorine coatings on the front and rear elements of the lens, useful for keeping them clear of grime as well as making cleaning an easier task.