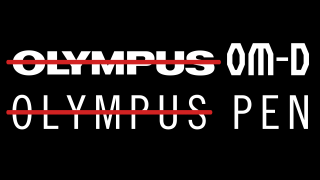 As we all know by now, Olympus has agreed to divest its camera business later this year. By 30 September 2020 an agreement will be made with the new custodian of the company's camera brand, Japan Industrial Partners (JIP).

It is now being reported that, as of 2021, JIP will drop the Olympus name for its photographic products, and will brand its cameras simply as "OM-D" and "PEN", with lenses being branded "Zuiko". (Presumably the same would be the case for Olympus' audio products, which are understood to be part of the sale.)

That's according to a report by 43 Rumors. "Starting from 2021 new products will not have the 'Olympus' name in it," writes the rumor site. "Cameras will be branded purely as 'OMD' or 'PEN' and lenses as 'ZUIKO' "

However, while 43 Rumors has an impressive track record of accurate leaks and inside information, it's also very possible that this is mere speculation – whether  educated or otherwise.

So what's the reality – will JIP continue to use the Olympus name for its cameras and lenses? We examined this question in our piece examining What does the Olympus sale mean. Obviously there's 84 years of equity in the Olympus brand, but whether JIP buys or licenses the right to use it will be determined by the final sale agreement.

According to the official sale announcement, the transaction will result in the formation of a new company currently described only as "NewCo". That will obviously not be its final name, though it does indicate at this stage that the new company's moniker has not been determined.

Looking at JIP's past carve-outs, we can see for example that the former 'Sony Vaio' trades today under the name 'Vaio'. JIP did not, after all, buy the Sony name – it only bought the laptop business, and Sony as a company still exists (and will not put its name on a product that it no longer owns or has any connection to).

So if its track record is anything to go by, JIP indeed may only secure the existing marks and branding – OM-D, PEN, Zuiko – but may not market them as 'Olympus OM-D' and 'Olympus PEN'. Again, JIP did not buy the Olympus name – it only bought the camera business.

Are the names OM-D and PEN strong enough brands, on their own? Young photographers likely have little awareness of the OM and PEN lineage of film cameras, so a brand name is important. It would be like calling a camera the EOS M6 Mark II instead of Canon EOS M6 Mark II – without a brand, it's just an alphabet soup that would be hard to market.

Our instinct is that JIP will look to license the Olympus name for use specifically in a photographic context. Ricoh, for example, licenses the Pentax brand for its DSLR cameras, so JIP may be able to negotiate continued use of the Olympus mark provided that it is differentiated from the parent Olympus Corporation.

Ultimately, the truth will out on 30 September when the final sale is agreed. Until then, we're going to continue enjoying, using, and calling it our "Olympus kit"!