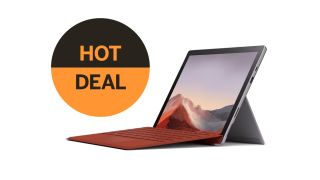 We've seen some amazing Cyber Monday laptop deals recently, including a particularly impressive $360 discount on the Microsoft Surface Pro 7, which is beloved by creative professionals.

However, that's not the only fantastic Black Friday laptop deal we've seen - you can also grab the HP 14 laptop for just $399 down from $569, which is the best deal we've seen on this particular model.

Wanting something cheaper? Staples have you sorted, with a $99.99 Lenovo 100e Chromebook. Yes, you read that price right!

Check out the best Cyber Monday laptop and Chromebook deals down below!

Microsoft Surface Pro 7 was $959 now $599
Save $360: This looks a superb Cyber Monday Best Buy deal on the latest Surface Pro. This offers a 12.3in touch screen with an Intel Core i5 processor, 8GB of memory, and 128GB SSD. In a platinum finish, this deal comes with the black type cover. View Deal

Lenovo 100e Chromebook: $99.99 at Staples (Save $120)
Perfect for students and for running basic tasks like emailing and web browsing, this portable device is a great choice for anyone after a cheap and cheerful laptop.View Deal

HP Pavilion Laptop 15z touch $449.99 was $1299.99
This is an incredible deal for a 15in laptop with 16GB of memory, 256GB SSD storage and an AMD Ryzen 5 processor. Available in four colors and with custom options to pimp the computer to your own specific needs.View Deal

Microsoft Surface Laptop 3  from $899 save up to $300
Slim and stylish laptop range with 13in or 15in options - build the version that suits your needs.View Deal

Dell XPS 13-inch Laptop £699 save £320
This 13in Dell comes with i3 8th-Gen Intel Core processor with 4GB of memory and 128GB of SSD storage. The XPS range is known for solid performance and good value, and with this Cyber Weekend discount this is a fabulous buy.View Deal

Dell XPS 15-inch Laptop £1749 save £420
High-performance 15in laptop that features i7 9th-Gen Intel Core 4.5GHzprocessor with 32GB of memory and one terabyte of SSD storage.View Deal

ASUS Celeron Chromebook: £199.99 from £299.99
The ASUS C523 15.6" Celeron 4GB 64GB Chromebook has had its price slashed by two thirds in this great Black Friday deal. With an Intel Celeron N3350 processor, Dual Core processor and 4GB of RAM, this is a great laptop deal. UK dealView Deal