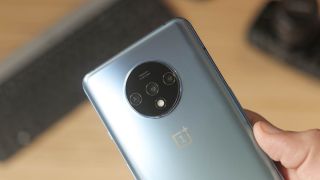 The OnePlus 7T has launched in India ahead of an expected global release in October. Launching alongside the OnePlus TV, it features a cutting edge flagship Snapdragon 855+ processor, as found in the Asus ROG Phone 2, a 90Hz Fluid AMOLED display that promises to be as silky smooth as that of the OnePlus 7 Pro and a brand new camera array, adding a wide and telephoto camera to the non-Pro OnePlus line for the first time.

Picking up where the OnePlus 7 left off, the 7T isn’t just a refresh, it’s a complete overhaul, with a longer 20:9 aspect ratio screen making the whole phone a bit taller. With Full HD+ resolution, it’s about as sharp as its predecessor but it’s much smoother, thanks to a 90Hz refresh rate.

With a screen max brightness of up to 1,000 nits, it isn’t just the smoothness that’s on-point, it also gets incredibly bright, and dark too, while blocking out 40% more blue light without even firing up eye protection.

With a frosted curved glass back, its matte finish looks great, and with availability in Glacial Blue or Frosted Silver, OnePlus is clearly vying for the cool-factor here.

A standout new feature of the 7T camera is the new Super macro option. This can get you as close as 2.5cm from your subject and still keep things looking sharp. The 7T also brings back Nightscape, OnePlus’ low light shooting mode, and now, it’s available across both the primary and ultra-wide angle cameras.

Loaded up with OIS, if you shoot 1080p footage with the 7T’s camera, a new Super stabilization feature locks things in place and ensures footage is incredibly smooth. Having used it, the only thing we can liken it to is Rock Steady on the DJI Osmo Action or Hyper Smooth on the GoPro Hero7 Black - it’s sensationally good.

With its cutting-edge Snapdragon 855+ processor, the new OnePlus 7T’s power betters most flagships out now, which makes it a perfect choice for gamers. It also boasts 8GB RAM, and 128GB storage, though, it isn’t expandable.

Stereo speakers combine with Dolby Atmos audio to make sure the 7T sounds as good as it looks, and with a 3800mAh battery inside, it’s set to last a full day too.

Loaded up with Android 10 - Google’s latest version of its mobile OS, and OnePlus’s Oxygen OS over the top, the 7T is also very well future-proofed, and an across-the-board, impressively specced phone.

While we have no confirmed UK or US pricing just yet, we have spent five days with the phone, so for more, read our full OnePlus 7T review and watch this space for pricing and availability.