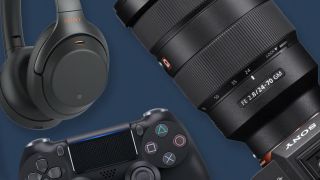 Sony has issued a statement on the ongoing coronavirus pandemic, and the effect that it is having on its various business divisions – including electronics, where "the flow of resources from suppliers in Asia has become unstable, having a wide-ranging impact on the manufacturing of goods in this segment."

This obviously affects everything from Sony's cameras and lenses to televisions, headphones and PlayStation videogames consoles. Indeed, it had previously been reported that widespread shortages of DRAM meant that Sony had to sacrifice new camera features in order to prepare for the release of the PlayStation 5.

Contrary to earlier reports, however, it seems that Sony's image sensor business – which accounts for around half the sensors in the world's imaging devices, from cameras to smartphones – has not been as adversely affected as anticipated.

"However, Sony's primary customers in this segment are smartphone makers who rely on supply chains in China, and although recovery in these supply chains has led to sales gradually returning to normal levels, there is a risk that going forward sales could be impacted by a slowdown in the smartphone market."

Of note, Sony's four manufacturing plants situated in China (two in Shanghai, one in Wuxi, Jiangsu, and one in Huizhou, Guangdong) were shut down from 24 January to 09 February, they have since reopened to varying degrees. "From February 10, all four plants have re-started operations in increments. Supply chain issues remain, but operations are returning to the level they were before the spread of the virus."

The company's two factories in in Malaysia (Kuala Lumpur and Penang) are shut down from 18 March to at least 14 April, and its plant in the United Kingdom (Wales) is also on shutdown from 26 March until at least 20 April.

Sony's full statement – which includes details on its motion picture and music divisions – can be read on the Sony Global website.