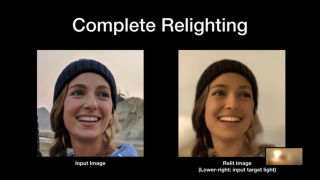 If you’ve ever shot an image and then realised too late that the light wasn’t quite right – well, there may be a solution on the way.

Researchers from UC San Diego and Google have unveiled a new neural network they claim to have trained to be able to adjust the lighting in any photo of a human face – change the direction, temperature and quality of the light at will.

The AI was “trained” using a database of images of 18 individuals captured under different directional light sources in a controlled setup, capturing each person from seven different angles using a densely sampled sphere of lights.

As a result, the neural network can replicate these various conditions on new photos – the demonstration video shows various real phone snaps fed into the AI, and the result afterwards that shows the change in their quality of light. It’s clearly early days, but it’s impressive stuff.

The changes in light don’t have to affect the entire image as well – the creators also show how the effect can be applied only to the image’s human subject while leaving the background untouched.

It works fast too – the creators say that the network can produce a 640 x 640 image in as little as 160 milliseconds, meaning “it may enable interactive user-facing photographic applications in the future.” This presumably means an app could be on the way, and judging by the fact that Google researchers and engineers were involved in the development of the technology, we think we can guess what smartphone range that app might start appearing on.

Still, all that’s likely a long way off. For now, take a look at the demonstration video and see what you think.

The best tablets for photo editing and photographers