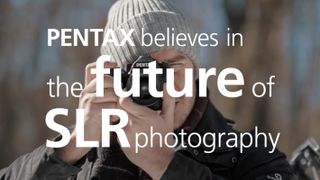 On social media, Pentax has been teasing a statement about its future. Now the manufacturer has revealed its statement, and it is simple: “Pentax believes in the future of SLR photography”.

It is the latest in a long line of messages from the company, eschewing a mirrorless future in favor of DSLRs. A strategy that seems increasingly questionable, in a world where every other major manufacturer has put its eggs in the mirrorless basket.

The company launched a microsite dedicated to extolling the virtues of SLR cameras and, specifically, the optical viewfinder – which Pentax is positioning as the key USP of its entire product line.

“Pentax is committed to the future of SLR photography through the continued development of camera technology,” states the strange new site. And the pro-SLR, anti-mirrorless sentiment is echoed in an accompanying new promotional video.

“It’s such a joy to use an SLR, that there is simply no substitute for this style of shooting.”

Pentax also released a peculiar video presentation and interview with president Shinobu Takahashi, who waxed lyrical about how SLRs “allow the photographer to sense and capture the light coming through the SLR-exclusive pentaprism.”

Takahashi made clear that the company does not choose to make DSLRs or mirrorless cameras based on the technology, but based on the picture-taking process offered by the pentaprism and optical viewfinder.

When asked directly by professional photographer Keita Sasaki, “Does Pentax have any plan to launch a full-frame mirrorless model equipped with a new lens mount?” the president made clear where the company’s vision lies.

“As I mentioned earlier, we aren’t prioritizing either SLRs or mirrorless models. The thing that matters most to Pentax is developing SLR cameras that will provide our users with the ultimate pleasure of photography throughout the process of picture-taking.”

In short, Pentax is intent on clinging to DSLR technology until the bitter end. Hopefully it’s a strategy that pays off for the company… but the choice to be a Blockbuster in a Netflix world is certainly a curious one.