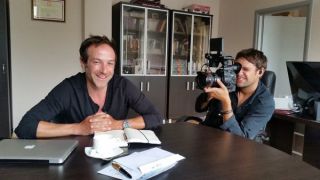 Icarus, which won the Academy Award for Best Documentary Feature at the 90th Oscar ceremony, intended to treat doping in sport the same way that legendary documentary Super Size Me treated fast food.

However, not only was the film one of the greatest documentaries ever made, Icarus also uncovered a global conspiracy around doping in professional sport – which resulted in the police and International Olympic Committee getting involved, and led to Russia being banned from the 2018 Winter Olympics.

The two C300s (superseded by this year's Canon EOS C300 Mark III) served as main cameras, while the 5D Mark II (obviously succeeded by the Canon EOS 5D Mark IV) was the B camera. While the two cinema bodies feature a Super 35mm sensor, the full-frame sensor made the 5D the camera of choice for shots requiring shallow depth of field, and was also used to film wide shots during interviews.

Halfway through filming the documentary, Grigory Rodchenkov – the scientist who designed a doping program (while head of Russia's anti-doping lab!) to help Russian athletes get away with cheating – offered to take the filmmakers to his notorious Moscow laboratory.

At this point, the crew scrambled to find a covert camera for filming. They settled on the Canon Legria HF G30, which while a consumer camera possessed the right aspect ratio – and, more importantly, automatic focus and exposure and focus, meaning that it could achieve an undercover fly-on-the-wall look.

You can read more about the fascinating story behind Icarus, its filming and its fallout on the Canon website.

The best camera for filmmaking in 2020 for photographers, vloggers, pros
The best cinema cameras in 2020: stepping up to full scale filmmaking
The best camcorders for video in 2020: which is the right one for you?