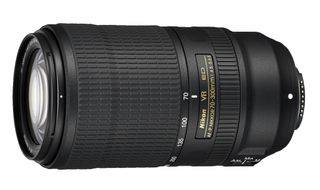 The lens follows a number of DX-format lenses to incorporate the technology, which is designed to provide faster and more discreet autofocus while recording videos.

To further help when shooting video, electronic diaphragm control ensures that changes to aperture happen smoothly and discreetly, although this should also benefit those capturing high-speed bursts.

It's also been equipped with Vibration Reduction technology, which promises up to 4.5 stops of correction over an equivalent unstabilised optic. Users can alternate between Normal and Sport VR options through a switch on the barrel, the latter of which is usually only seen on pricier telephoto optics in Nikon's lineup.

Nikon cites a wide range of applications for the new lens, including sports, wildlife and travel. As with other FX-format lenses, it can also be used in conjunction with a DX-format body, where it offers an effective focal length of 105-450mm.

Those wishing to use the lens in adverse conditions will also be pleased to know that Nikon has designed it with dust and drip resistance, which makes it an ideal partner to similarly protected DSLRs such as the Nikon D810.

Other features include a nine-bladed diaphragm for circular bokeh, together with a metal lens mount for durability and full-time, manual-focus override. The lens also boasts a respectable minimum focusing distance of just 1.25m.

Nikon hasn't stated an expected date of arrival, although suggested retail prices of £749.99 and $699.95 have been set for the U.K. and U.S. respectively.