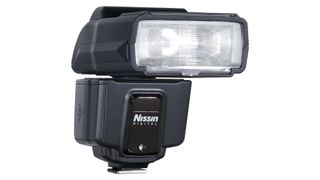 Not to be confused with the Nissin Di600, the Nissin i600 is a new speedlight being released by Kenro in the UK (it was launched in the US earlier this year).

It’s an update of the popular Nissin i60A, and is designed primarily for smaller mirrorless systems, measuring just 11.2cm in height and weighing a slender 300g without batteries. It operates on four AA batteries, and Kenro says this will give it an expected lifespan of 220 to 1500 flashes and recycle times between 0.1 and 5.5 seconds, all depending on the power of the output used.

The Nissin i600 has a solid GN60 output and a 24-200mm zoom, which can be adjusted automatically or manually, covering a broad range of flash-based shooting situations. Its built-in high-speed sync capabilities support shutter speeds of up to 1/800sec, and it has full TTL functionality. It also has overheat protection and a battery-saving mode.

Various slave settings allow for flexible wireless flash options, and the flash head also has a built-in diffuser that provides 16mm coverage. A bounce card can also be extended and retracted, even when a softbox is also being used. The flash head can rotate 180 degrees horizontally and 90 degrees vertically.

Control-wise, the i600 uses a dial-based system on its rear that users of Nissin’s i40 will find familiar. Flash output can be corrected to +/- 2 EV in half-step increments, meaning it’s also useful for outdoor work as well as in the studio.

To complement the flash, Nissin has also released the LS-55C carbon fibre flash stand, which provides an effective support for the flash unit with a maximum height of 2m. It weighs 625g and has five twist-lock leg sections.

The best budget flashgun in 2019

Bounce flash: tips to achieve natural lighting with a flashgun

Fill-in flash: tips and tricks for using a flashgun in daylight