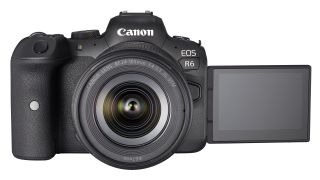 After months of leaks, the Canon EOS R6 has now been officially unveiled – and it brings the company’s flagship sensor, speed and video capabilities to the masses, with all the added benefits of mirrorless technology.

For starters, the R6 has a 20.1-megapixel full-frame sensor – in fact, it’s basically the same sensor found in the flagship DSLR, though it foregoes the 1D X III’s new low-pass filter. It also matches the Mark III’s top speed of 20fps continuous shooting with the electronic shutter, and can also shoot at 12fps with the mechanical shutter.

Speaking of AF, the EOS R6 also inherits many of the phenomenal autofocus capabilities of the 1D X Mark III – including Deep Learning AF, which enables eye, face and head detection and tracking. Moreover, it also features Animal AF that even the flagship doesn’t possess, making it able to track eyes, faces and bodies of dogs, cats and birds in flight.

Though it doesn’t pac the 8K wallop of the R5, the R6 features oversampled 5.1K to deliver 4K video up to 60fps and 1080p / FullHD up to 120fps – while retaining the full raft of AF functions, including eye, face, head and animal tracking.

As a 6-series camera, the R6 gets a familiar mode dial on the top and features a light, weather-resistant, poly-carbon lighter body. Like the R5, it also has a new customizable button on the front of the camera grip (which can be set, for example, to activate AF in order to free up your thumb for other buttons at the rear).