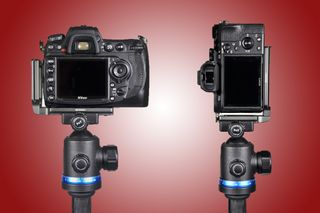 Benro has announced its brand new BLB1 Universal L Bracket, taking another step on its mission to give photographers as much stability as possible for their photos.

L brackets keep the camera's centre of gravity directly over the tripod at all times – even when shooting upright-format images. This makes it perfect for landscape photography where you can often be battered by wind, rain and all sorts of inclement weather.

Traditional tripod head and camera combinations tend to incidentally favor landscape-orientation photographs. This is because, when you've placed your camera in landscape, the centre of the camera is directly over the legs, providing maximum stability.

When you change to portrait orientation, however, the camera is now attached to the tripod by its side and is leaning off-centre. If you have a heavy camera and lens combination on a windy day, not only does this increase the chance of camera shake, there's always a risk that your tripod could blow clean over.

Another advantage of an L bracket is that it requires minimal adjustment to your composition when changing from landscape to portrait orientation. When using an ordinary plate you're significantly shifting the camera's angle of view, which often means that you have to start your composition from scratch. This is much less of an issue with an L bracket.

Made from durable aluminum, the BLB1 L bracket is also Arca-compatible, meaning that it offers a quick-release system that makes attaching your camera to the tripod simple. In addition, the bracket wraps around the camera body, which helps to protect it against damage from accidental drops.

"This is a small but important addition to any photographer’s kit; the sort of thing you’ll wonder how you ever managed without it," said Benro brand manager, Mark Hoskins. "The impact it can have on a photographer’s experience, and the quality of their images, is not to be underestimated.”

The BLB1 Benro Universal L Bracket is available to purchase now from £49.95 (around $41) –  an official US price has yet to be announced.