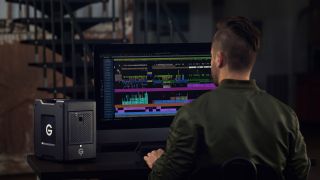 G-Technology has interviewed scores of world-class photo and video professionals on what’s most important in their work. Almost without exception, they talk about backing up data in terms of protecting their clients’ memories. Only Wilson Fox adds that he is also protecting his own memories.

“I go on all these crazy adventures,” he says, “but I don’t take selfies. I don’t have anything autographed. I get to live through those memories every time someone says, ‘Here, let me see your portfolio.’ And they’ll say, ‘You were in the same room with him?’ And I’m like, ‘Yeah, for months. We’ve cried.” You can hear the wistful smile in Wilson’s voice. “We had big man-hug cries.”

Based in Albuquerque, New Mexico, Wilson emerged from a decade in the six-figure corporate world with an interest in photography and enough budget to buy gear. He also practised jiu-jitsu, which dovetailed with the mixed martial arts (MMA) world that oddly thrived in Albuquerque. Wilson approached several of the most prominent MMA competitors in the city and volunteered to be their personal photographer.

“I basically said, ‘I want to learn. I’ll never charge you a dollar. You’ll never pay for a flight or a hotel room. The only thing I ever ask is that when somebody calls and asks about Will Fox, I just want you to say I’m a good person.”

Carlos Condit, who had won two championship titles at that point, accepted Wilson’s offer. That job opened the door to others. Soon, the largest MMA promotion company was contacting Wilson. Commercial gigs appeared from numerous top-level athletic brands. Throughout those years, Wilson learned to specialize in gritty, black-and-white locker-room shots. He knew that established photographers in the field had the fights amply covered, but he saw a niche available in telling the story of the fights – and the fighters – from behind the scenes and leapt at it.

Covering fights relies on nearly as much speed from the photographers as from the combatants. Tethered to a phone or tablet, Wilson would have 30 to 40 seconds to capture, preview, select, crop, edit, and upload a shot onto social media. He would rack up 2,000 or so RAW images per night and need to back up these shots to multiple drives before hopping on his next flight that evening.

The toll on Wilson’s health and private life was equally brutal. He recalls one November when he was on the road for 28 days straight, when the endless rotation of airports and hotel rooms became a blur. He has covered events from Austin to Australia. His girlfriend was understanding and only requested he behave responsibly while travelling. They survived those hard years, and recently they got married, but Wilson knew the pace would eventually crush him like a triangle choke. He needed to evolve his career.

Scaling into sales and sanity

Wilson needed to double his job rates and halve his travel time, and being “the gritty locker-room guy” wasn’t going to get him there. Those weren’t the shots showing up on magazine covers and commercials ads. In only a handful of years, the world had moved on.

“Clients know I can deliver images really fast, but this space is so competitive. They want to know if I can also do video, and then whether I can do multi-cam. I’m working with an agency right now, and we’re shooting on four RED cameras. And you know how it is – high-quality content means high-quality storage demands. I’m filming while also pulling and doing edits on the fly, all in a remote location. I don’t think I could have scaled into this without the G-SPEED Shuttle SSD.”

Sized for travel but protected with an eight-drive RAID and 16TB of total SSD capacity, Wilson acknowledges that the G-SPEED Shuttle SSD is overkill for his photo work. However, gritty black-and-white stills are no longer where he wants to live. Wilson wants to be a “full-blown video guy, with all the lights and high production value,” and he’s nearly there.

Of course, that calibre of work requires maximum throughput combined with reliable data protection. He copies his G-SPEED Shuttle SSD to secondary NAS solutions at his home and office, but the mass of his heavy lifting – the quick-turn, top-quality video work he wants to stake his future on – depends on the G-Technology enclosure’s Thunderbolt 3-driven performance.

However, it’s not about the money. If it were, Wilson never would have left that six-figure corporate job. He never would have volunteered his services for free at the beginning. As a jiu-jitsu enthusiast, Wilson was drawn to MMA and found himself fortuitously in one of the then-fledgling sport’s top cradles. MMA was rising in popularity, and fast. These athletes might someday be internationally known titans.

To reach that point, though, the athletes need to scale. MMA as a whole needs to scale. And in that pursuit, image means everything.

“I want to elevate my guys,” says Wilson. “They’ll say, ‘Now, Will Fox is going to take me from the locker room to that commercial look. He’s telling me to put on a shirt and tie, having me pose a little bit more.’ It’s about me helping my friends to the next level. I want to grow with them. I invested a lot of my personal time into these fighters. That’s why these archives have to be backed up and reliably stored. The sport isn’t where boxing is. It’s not legendary yet. But when these guys all join the hall of fame, I’m going to have the best archive around.”

Earlier on: Sam Fagan on the same road

Sam Fagan is 20 years old. He also competes in jiu-jitsu. Like Wilson, he started out by frequenting an MMA gym and worked to befriend the top coaches and players. Prominent Pacific Northwest fighter Bryan Nuro allowed Sam and his camera into one of his last amateur fights, and that was enough. Sam got hit – with the desire to make fight photography into a career.

He would usually show up at the weigh-in before fights. Again, that gritty locker room provided an easy entry point. But one night, a local event’s head photographer was out of town, and the backup photographer wasn’t shooting. Sam was introduced to the promoter, allowed in with a press pass, and he had his first shot at the big leagues. He did not disappoint.

Three years after that first amateur fight, Sam now covers sporting and commercial gigs regularly. He shoots 100GB of RAW files at each event, which immediately fills his laptop to capacity, thus requiring external storage. This is where his youth comes into play, though. Until recently, he has relied on USB 3.0 drives, which he complains were crippling in their slowness. He had one drive fail and another be dead out of the box.

He solved the threat to his files by investing in four hard drives and a low-end NAS enclosure, so at least he now enjoys RAID protection. However, Sam isn’t coming from a six-figure past career. He’s hardly out of high school and doesn’t have the money to invest in recommended gear. Yet. But such upgrades are, he confesses, at the top of his priority list.

“When it comes to making it further in sports and being more competitive as a photographer, it’s all about workflow: how efficient you are, how quick you can deliver images, especially if you’re working for a media outlet. You want to be able to drop your images, send them to an editor, or have an editor live picking out images. A quicker drive just helps you be better than your competition.”

Because right now, it’s a good thing he has the energy of a 20-year-old. He has to sit in hotel lobbies, watching files slowly transfer before he can start editing. The longer he waits, the more exhausted he gets.

“Yeah,” he says. “Having faster drives would be a life-changer.”