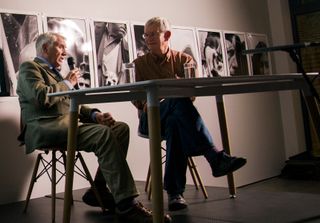 With a career spanning over six decades in photojournalism, Sir Don McCullin has also become one of the great photographers of our time.

He is best-known for capturing the international conflict zones of the late 20th century in The Sunday Times Magazine. But his new book The Landscape shows his more pastoral work which has been shot over the entirety of his  working life.

We listened in on an exclusive conversation between Martin Parr and Sir Don McCullin at the Martin Parr Foundation in Bristol, and discovered (in 10 quotes) what taking photos really means to the celebrated war photographer.

1.McCullin on becoming a photographer

"I never really wanted to be a photographer. In a way, photography chose me."

2. McCullin on fame and fortune

"I was never interested in financial wealth. All I wanted was to see my name under the photographs. That was my reward. I wanted to bring my family name to a place where people could see and respect it."

"I am still getting blackmailed by photography, which is supposed to be something I love. I don't believe you do can anything well in life unless you are in this position."

"I didn't have an education and I thought photography would be really good because all you do is go out and take pictures, it's not political... and you know, almost everything I've touched has been political."

Photography is something where every time you take a picture, you are recording the lives of people, your family and you are all part of the historical journey.

"In my darkroom when I see that print coming in the developer, it's as if I win the lottery."

"Photographers are not total fools, they know what they are doing. We know what we are doing."

"I've never been afraid of other people taking pictures. Everyone takes pictures on their phones now. Any joy I get out of it is because I don't have to look at them and secondly, they don't really improve very well when you try to enlarge them."

"I've never had great interest in the camera equipment. I said once that I use a camera the way I would use a toothbrush. It's a necessity. I need a camera to work with, but I don't work with a camera, I work with my feelings and my eyes."

"Photography gives you untold strength really, once something takes you over. It is amazing what you can do that you don't realise. I get still excited about photography and I am 83 years old. Isn't that wonderful really?"

The Landscape, published by Jonathon Cape, is out now.

You can read the full interview between Don McCullin and Martin Parr in the next issue of Digital Camera magazine, out 16 November.