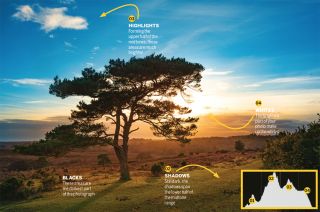 A histogram is a chart that represents a quantity of something over a given range, and in terms of photography we’re talking about quantity of light over a given tonal range (from black to white).

The mission: Learn to read and interpret the histogram on a Nikon camera

Kit needed: DSLR or camera with a histogram display

The photographer’s histogram is split into four distinct sections. Going from left-to-right, we see Blacks, Shadows, Highlights and Whites, respectively from darkest to lightest. If you want to view the histogram on a photo you’ve taken, head to Playback display options on your camera and tick the Overview box, then click OK. Then simply open an image you’ve taken. Next, click up or down on the multi-selector until the histogram appears.

Read more: Cheat sheet: How to read a histogram

There’s a common misconception that one should photograph to render a certain shape of histogram. Rather, it works the other way around – by informing the photographer of light and dark presence in a photo.

The two main areas we look at are: is it heavily stacked to one side; and does the data lay against the edge of the graph? If it’s the former, and the subject isn’t necessarily completely dark, or completely light, this may be an exposure issue that we have to rectify.

However, the latter tells us whether there’s any clipping (distortion) occurring in the blacks or whites – under- or overexposure respectively, resulting in lost information.

It’s worth bearing in mind that the histogram you see on the back screen of your camera shows you the tonal range of the JPEG thumbnail only, even if you shoot in Raw.

Your Raw files contain much more data than JPEGs and as such, there’s an acceptable level of clipping that can occur without complete data loss. So let’s learn what histogram shapes tell us about our photos.

This looks like a bell-curve as it raises gradually in the middle. This type of image has no deep shadows or bright highlights, which is commonly seen with soft, even lighting, against subjects of low contrast, as you can see above in this portrait taken on an overcast day.

A histogram steeped to the left means plenty of darker tones, and that’s what we want to see if photographing dark subjects, or shooting at night. However, if, in reality, you notice the scene is actually quite bright then you’re likely underexposed.

Steeping to the right tells us the scene contains plenty of bright areas, such as a snowy scene, photos with plenty of sky included in the shot, or a bride in a wedding dress. However, it could mean overexposure if the scene or the subject isn’t naturally bright.

As the name suggests, there are two distinct peaks in the histogram reading. This can be a result of a subject having dark and light areas, such as landscape on a sunny day with no clouds, or with comparatively bright off-camera lighting for a portrait.

This histogram occurs when there’s lots of exposure detail randomly placed throughout the scene, with no particular bias towards one area of the graph. It doesn’t tell us much about the image, only that there’s a lot of tonal values throughout the frame.

In the Playback display options menu tick the Highlights box and then click OK. Once you’ve done that, open a photo and press up or down on the multi-selector. Any clipped highlights will now flash, making it easy to spot clipping issues in your images.

Engage the RGB histogram in the Photo shooting menu to view the red, green and blue color channels, which can help to identify chromatic distortion, useful for important shoots where color reproduction is imperative.

Read more:
Cheat sheet: How to read a histogram
10 awesome newborn photography tips
What is focus peaking?
How to get the best camera set up to take perfect black-and-white images