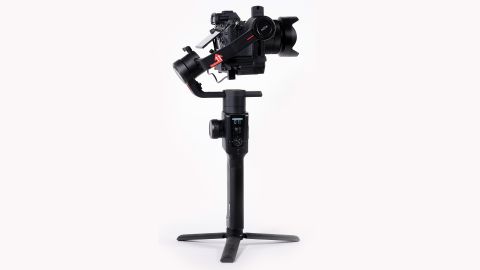 The Moza Air 2 gimbal takes a while to get to grips with, but it’s a powerful piece of kit that helps to deliver wonderfully smooth handheld footage

Most modern cameras can output decent video, but there’s a limit to how much stabilisation you can get from an in-camera or lens-based system. This can make a motorised camera gimbal an attractive option for anyone looking to improve their handheld video shooting capability. And while in the past these were big, heavy and ludicrously expensive, the move towards smaller, lighter cameras has seen a shift in gimbal design.

The Moza Air 2 from Gudsen is a three-axis stabiliser aimed at DSLR and mirrorless camera users. It has a payload of up to 4.2kg, and its four rechargeable batteries supply enough power for up to 16 hours of use on a single charge.

The Moza Air 2 is compatible with a range of Canon, Nikon, Fujifilm, Leica, Panasonic, Sony and Blackmagic Design cameras. It’s advisable to check the manufacturer’s compatibiity sheet to ensure works with your specific camera.

It also has a collection of follow modes that are designed to help you get smooth footage when moving over different terrain or following a range of subjects. Further good news is that it can be set to follow focus with some specific Canon, Nikon and Sony cameras.

Pressing the joystick toggles through the follow modes, while the trigger on the grip locks and unlocks the movements, switches to selfie mode and re-centres the gimbal. The button on the wheel accesses the focus options

You need to reserve a bit of time to set up the Moza Air 2 for the first time, and you’ll probably have to update the firmware to get everything working correctly. The first steps are to attach the quick-release plate to your camera, mount the camera in the gimbal and then connect your camera to the Moza Air 2 using one of the supplied cables. Next, you need to balance the camera in each of the three directions. This takes a few minutes, and it’s worth making a note of the marking alignments if you want to swap to a different lens at any time.

It doesn’t take long to get familiar with the basics of using the Moza Air 2, but it has a depth of features that take some puzzling out. Crucially, it does a great job of smoothing out the shake and wobble of handheld shooting and transforms moving footage into professional-looking video. As it weighs 1.6kg you may want to work up to using the Moza Air 2 for a full day of shooting, however.

Read more
The best gimbals for your iPhone, GoPro and camera

The best cameras for vlogging