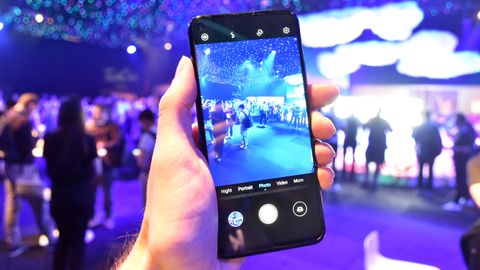 The Honor 20 has all the ingredients of a top-tier camera phone, apart from the four-figure price. Image quality isn't quite on par with phones like the Pixel 3 or Galaxy S10+, but it comes close, yet the Honor 20 is around half the cost. But stick around for the Honor 20 Pro and you'll likely get an even better deal.

Boasting four rear-facing cameras and camera tech straight from camera phone masters Huawei (Honor is a youth-orientated sub brand of Huawei), the Honor 20 is out to offer premium phone camera performance at a mid-range price point.

Of course this all comes in the midst of uncertainty over Huawei's (and by extension, Honor's) ongoing relationship with Google - specifically its variant of the Android mobile OS, and key Google apps. This tricky situation is, at the time of writing, still up in the air, but as it stands we're reviewing the Honor 20 on its technological merit and putting aside the current political problems.

As you'd expect for a phone targeted at style-conscious young people, the Honor 20 looks the part, being available in three body colour options: Midnight Black, Sapphire Blue, and Icelandic White. However, the Honor 20 can't be had in the more eye-catching shimmering finishes available for the Honor 20 Pro (Phantom blue, and Phantom Black).

Up front is a large 6.26-inch screen with a resolution of 1080x2340, equating to a 19.5:9 aspect ratio and 412ppi. The screen's bezels are so slim that Honor is claiming a 91.7-per-cent screen-to-body ratio. The 32MP front-facing selfie camera is housed within the screen in the upper left corner, similar to how Samsung incorporated the Galaxy S10 and S10E's selfie camera, albeit on the other side of the display.

The Honor 20 sports a total of four rear-facing cameras - double that of the Honor 10 - bringing it in line with the Huawei P30 Pro. They consist of:

The main camera in the Honor 20 Pro is based around Sony’s IMX 586 chip, which at 1/2-inch in size is slightly larger than a typical 1/2.3-inch compact camera sensor, and a full 25% bigger than the 1/2.55-inch primary image sensors in the iPhone Xs Max and Galaxy S10+

Surface area matters in the world of image sensors, as it allows more space for light-sensitive photocells (which translate to pixels in your images), enabling higher resolution photos. An alternative option to utilise the extra sensor space is to have fewer pixels, but make each one physically bigger and therefore more light-sensitive. This should improve a camera's low light performance, giving you clearer images with less grain.

Like the Huawei P30 Pro, Honor appears to have gone down the first route with the Honor 20. 48 megapixels is a insane for what's still a very small sensor (and it even beats the 40MP Huawei P30 Pro), but there's more to it. Through what Honor calls ‘Light Fusion’ technology, each group of four pixels acts as one, single large pixel. It's a trick usually called pixel binning, and it gives you the best of both worlds - high resolution in good light, and lower resolution 12 megapixel images in trickier lighting conditions. In fact, the Honor 20 defaults to 12MP as standard, as fine detail can often be better resolved at this resolution than at 48MP thanks to the amount of software trickery that's employed through combining pixels in this way.

The Honor 20 doesn't get the radical new RYYB (red, yellow, yellow, blue) Super Spectrum sensor tech from the Huawei P30 Pro. This would further increase light sensitivity, to a point where the P30 Pro boasts an incredible maximum sensitivity rating of ISO 409,600. However, the Honor 20 isn't exactly left in the dust, as it sports an almost as impressive ISO 102,400 rating - far higher than a Galaxy S10+ or iPhone Xs Max can reach.

This is however an f/stop less than the max sensitivity of the Honor 20 Pro (ISO 204,800) and the Honor 20 also trails the Pro in terms of maximum lens aperture (f/1.8 to the Pro's f/1.4). Honor has also omitted optical image stabilisation from the Honor 20's main camera (it is included with the Pro's main and telephoto cameras). These factors combined will reduce the Honor 20's low light capabilities relative to the Pro, but the Honor 20's ISO and aperture stats are still impressive for a camera phone.

Arguably the most significant camera difference between the Honor 20 and Honor 20 Pro is the Honor 20 omits the 20 Pro's 8MP telephoto camera, replacing it with a 2MP depth sensor camera. The latter is used to determine object positions in space in order to generate more convincing shallow depth of field effects - in other words, better background bokeh blur in portrait shots.

However, a telephoto camera can be just as - if not more -useful, both for zooming in on subjects, and for portrait shots, where a camera with a longer focal length can deliver 'natural' bokeh blur, along with a more flattering/less bulging perspective. The Honor 20's camera app does have a 2x zoom setting which zones in on an area of the 48MP sensor to deliver a zoomed-in image with more detail than simply using digital zoom, but the results are not as detailed as images from a dedicated telephoto camera.

Panoramic vistas or large group shots can be captured by the 16MP wide-angle camera that gives a very wide 13mm-equivalent focal length and a huge 117-degree field of view.

The fourth camera in the quad-camera set-up gets its own space to the side of the other three cameras, as Honor says this makes more room for the larger battery. It's a 2MP dedicated macro camera and can focus as close as 4cm from your subject.

Anyone familiar with Huawei's camera app will feel right at home shooting with the Honor 20. It's a near-identical design and allows for extensive camera settings control, should you need them. However, the camera does a great job of autofocusing and exposure metering with no user adjustment, even in low light.

We were impressed at how reliably the Honor 20 produces sharp, bright and well exposed images without any need to switch from the default automatic Photo mode to Pro mode, where you can manually adjust key camera settings. The only slight annoyance in Photo mode is after some shots are snapped, the phone applies sharpening, and during these few seconds it instructs you to "steady your device", which can be annoying if you just want to snap and go.

We shot the Honor 20 alongside a Galaxy S10+ for comparison, to see if this 'budget' smartphone could hold its own against one of our favourite camera phones of the moment. While the two are obviously not direct rivals, the Honor 20 does get quite close to matching the Samsung's image quality. Images and well saturated with accurate white balance, and rarely does Honor's HDR blow any highlight detail. However, the S10+ did show up some minor shortcomings in the Honor 20's image quality. Very fine detail is slightly lacking, regardless of lighting conditions, and shadow areas can be somewhat dark and murky in low light indoors scenes.

But our main complaint is Honor's general image processing, which can be a bit heavy handed. If you like to view shots at 100% image size, it's noticeably that there's a lot of noise reduction processing going on, which can make images look slightly painterly, with a subtle watercolour effect. Sharpening is applied to object edges in images to counteract the noise reduction smoothing, but again, this image processing doesn't quite look as natural as it could, with edges apearing slightly over-sharpened and jagged.

These observations aren't a huge deal though, and you'll need to scrutinise your shots to notice them, but given how close current camera phone image quality is these days, it's these small details that separate the best phone cameras from the rest.

Scroll through each gallery to see image samples taken using the main and ultra-wide cameras, along with the 2x zoom function:

Both the main and ultra-wide cameras perform well, though the latter does produce noticeable purple fringing towards the corners of frame. This is a fairly common trait in ultra-wide angle optics though.

A bigger complaint is the 2x zoom function, which is using software to magnify a portion of the image frame, rather than proper optical zoom. The result looks better than conventional digital zoom would achieve, but only just. It's on par with Google's Super Res Zoom in the Pixel 3, and shots taken with 2x zoom generally looks nice and detailed at 50% image size, but viewed any larger you'll notice fine detail just isn't there and images look obviously painterly and heavily processed.

The cost of flagship camera phones has risen steadily in the last few years, to a point where it's now almost the norm for a top-end model to carry a four-figure price tag. Of course mid-range phones with significantly more palatable prices have always been an option, but you usually have to settle for a second-rate camera experience - a single camera, no optical zoom, no optical stabilisation, and average image quality. The beauty of the Honor 20 is you get a quad-camera set-up, yet it'll cost you less than half the price of an equivalent iPhone Xs Max.

But, there's a but. Those quad cameras just aren't as useful as the four cameras in the Honor 20 Pro. We'd prefer the 3x zoom telephoto camera in the 20 Pro instead of the Honor 20's depth-sensing camera, and enthusiastic photographers are likely to miss the 20 Pro's optical image stabilisation and larger lens aperture of its primary rear camera.

If you're big on image quality, Honor's image processing may be a minor bugbear, especially if you're used to the more natural look from iPhone/Galaxy S images. However we recognise that the majority of Honor 20 buyers probably won't find these issues off-putting, as the phone's images do look very good when viewed on the phone or a tablet.

If you're shopping for a well-specced and high-performing camera phone at the £400/€500 price point, the Honor 20 is well worth considering, but the Honor 20 Pro looks like it may well be better value for keen photographers, once it is released.

Read more:
• Best selfie sticks for your smartphone
• The best iPhone tripods
• The best gimbals for your iPhone, GoPro and camera
• The best phone cases to protect your camera phone