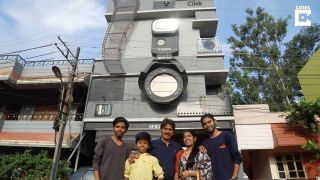 You might think that you love photography, but this man's love for all things camera-related makes Romeo and Juliet's romance seem casual by comparison. Not only has he built his own house in the shape of a camera and flashgun, he has named his children after famous camera brands.

Meet 49-year-old photographer Ravi Hongal, a resident of Belgaum in India, who has created the most camera-mad house you've ever seen. According to news agency Caters he has spent over £75,000 ($94,500 / AU$135,000) building his three-storey dream house.

Obviously, his children will inevitably be known among their friends as "the kids whose dad loves cameras so much that he built a camera house". That clearly wasn't enough for Mr Hongal, however, who wanted to ensure that his kids' friends were in no doubt about how much he loves cameras – so he named his offspring Canon, Nikon and Epson.

Of course, Epson no longer makes cameras, so Epson Hongal's friends probably think that his father named him after a printer.

As for the house, it is magnificent in its grotesquery. The exterior façade consists of a Nikon camera body with a Nikkor 50mm f/1.8G, although purists will no doubt be apoplectic that it features a Canon flashgun mounted on the hotshoe and a 64GB Sony SD memory card. Apparently it's a hybrid film and digital body, as there is also a roll of 35mm film extending to the top of the building – where the house's name, "Click", is also proudly emblazoned.

The interior of the house is apparently just as camera-mad, as Caters' report states that the walls and ceilings have been designed like the inside of different parts of a camera body.

We always say that photography is the best hobby in the world and, as crazy as all this may be, it's wonderful to see somebody expressing his passion for his pastime in such colorful ways. We're sure that Mr Hongal is the talk of the town, the talk of his camera club, and the talk of his children's therapy sessions.

The best Nikon camera: including Nikon DSLRs, Nikon Z and Coolpix compacts
Best Canon flashgun: which Speedlite will be best for you?
Best film: our picks of the best 35mm film, roll film, and sheet film for your camera