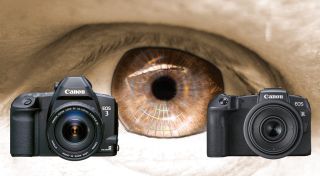 What goes around comes around, and what's old really is new, as Canon is dusting off its 20-year-old Eye Controlled Focus technology – and photographers both old and new alike are excited to see it return.

This clever bit of tech – which we last saw in old film cameras like the Canon EOS-3,  EOS 30 / Elan 7e and EOS-5 / A2e – enables you to move your focus point by simply moving your eyeball.

For some photographers, once it was calibrated this was an absolute game-changer – and even a genuine reason to shift over to using Canon cameras.

"This feature is what convinced me to change over to Canon after 25 years with a competing brand," commented Bruce Dorn on the Digital Camera World Facebook page. "Never regretted it."

Posted by Digitalcameraworld on

However, Canon abandoned the technology when it transitioned to digital SLR cameras. So, for those who mourned its absence in the digital era, news that it was poised to return in future mirrorless cameras was music to the ears.

"FINALLY!!! I had this on the last two film cameras before (ie. before 2005) going digital," beamed Nelson Harrison. "When I got my first digital camera I couldn't figure out why my images were not in focus. I was so use to looking and that being the focus point not actually having to set the focus point in the camera… took me a while."

While the updated version will add a clever new algorithm, no doubt using AI to better track eye behavior, the original system simply used an infra-red sensor that was quite fallible – especially for those who wear spectacles.

Mike Lambert is such a photographer. "Never liked it. Didn’t play well with glasses. If they’ve fixed that then great." Joe Homsy added simply that, "I had one and it didn’t work well!"

Still, the promise of new technology revitalizing old ideas is enough to make the concept enticing to modern photographers who weren't shooting 20 years ago.

"Oh it's eye AF in reverse," chuckled Wong Choong Cheok. "Interesting," added Ludi Barrs. "It was before my photo days so I have never heard of it."

Then again, there are those who would much rather that Canon stopped looking to the past and instead focused on bringing its cameras more in line with modern requirements. "Bring better dynamic Range, dual SD cards," groaned Görän Resimövić.

Ultimately, until the revamped technology makes it into cameras (if that ever even happens), we won't know if looking to the past was the best move for the future. If that turns out to be the case, perhaps disc film is also due a comeback…