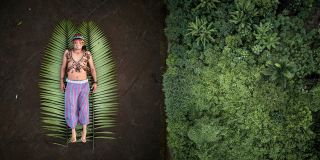 The World Photography Organization has recently announced the overall winners for their annual Sony World Photography Awards. Not only have the ten category winners of the Professional competition and the winners of the Open, Student and Youth competitions been announced, but the grand prize winner of the Photographer of the Year title and accompanying $25,000 prize has also been declared as Pablo Albarenga from Uruguay.

Pablo Albarenga captured the series 'Seeds of Resistance', a body of work that pairs photos of landscapes and territories in danger from mining and agribusinesses with portraits of the activists fighting to conserve them.

This powerful series draws attention to the struggle leaders and and environmentalists have faced with trying to protect their communities from projects threatening their territories, with at least 207 of them having been killed in 2017. According to a 2018 report by Global Witness, most of these cases occurred in Brazil, with 57 assassinations being recorded. 80% of these were against people defending the Amazon.

Other category winners include Chung Ming Ko, who won the Documentary category with his series 'Wounds of Hong Kong'. This series covers the Hong King protests, which began as an objection to the extradition bill, but has now evolved into a wider protest regarding the future of the city.

Ronny Behnert won the Landscape category with his series 'Torii', which focuses on shrines and torii (traditional Japanese gates commonly found at the entrance to Shinto shrines). Behnert says, "Most of the time I use neutral density filters to force long exposures and keep my work minimalist in style. Some of my exposures last five minutes or more, which makes any distracting elements in the water and sky disappear."

Founder and CEO of the World Photography Organization Scott Gray says, "The Sony World Photography Awards was established to help get photographers the recognition they deserve, with the exhibition providing an important platform to share their work with new audiences. Due to current restrictions with the global pandemic we were unable to hold this year's exhibition however we are still dedicated to promoting winning images and projects and ensure the Awards provide awareness and appreciation for the photographers' work."

Check out the virtual exhibition for the Sony World Photography Awards here or view a selection of photos from the category winners below.