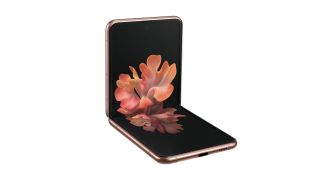 While many of the updates outside of the 5G-enabled chipset are incremental, there's plenty of exciting tech to tempt anyone who was interested by the original Z Flip, but was put off by the 4G SoC. One of the most interesting upgraded features is the Flex mode, which automatically splits the display into two 4" screens, which means you can view content on the top half of the display and control the bottom half yourself.

Meanwhile, users will be able to effectively multi-task with Multi-Active Window by using the Multi-Window Tray to drag and drop the apps they want to use. Users will even be able to open and access two apps at once using App Pair. This means that if you wanted to share your photos with a friend, the Gallery and Messaging apps could open simultaneously for maximum ease.

The Samsung Galaxy Z Flip 5G will have a dual camera unit on the back of the phone comprised of a 12MP f/2.2 ultra-wide camera and a 12MP f/1.8 wide angle camera. On the front of the phone there will be a 10MP f/2.4 selfie camera. The phone will carry a 3,300 mAh dual battery and will be capable of Fast Charging via power cord and Wireless.

Best flip phones & best fold phones
Best lenses for iPhone and Android phones in 2020: add on phone lenses
Best budget camera phone: these are the best cheap camera phones right now
Best iPhone for photography in 2020: from the iPhone 7 Plus to 11 Pro