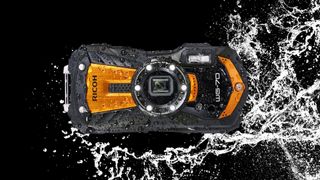 Ricoh has officially announced the new Ricoh WG-70, its latest weatherproof outdoor camera. However, the new name and new orange color are essentially all that's new, as the camera is almost identical to its predecessor – right down to the lack of 4K.

The Ricoh WG-70 virtually photocopies the specs of the Ricoh WG-60 – which isn't entirely a bad thing, as the previous model is one of the best waterproof cameras on the market.

The lack of 4K video is obviously a huge missed trick for the WG-70 – not only because its best in class rival, the Olympus Tough TG-6, features 4K, but because every camera in 2020 should really come with 4K as standard.

It's not entirely without additions; as well as the new color option, Cross Process has been added to the Image Tone Mode filters, and the Digital Microscope mode has been improved. Images in this mode were limited to 2MP (1920x1080) on the WG-60, but the recording size can now be set to a maximum of 12MP (4608 x 2592, with a 16:9 ratio).