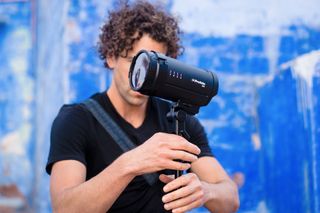 After a week of online teasing, Profoto has finally unveiled its latest portable lighting unit, the B10.

Weighing less than half of a B1, the new 250-watt head sits adjacent to the B2 in the Profoto family tree.

Where the B10 monobloc has the same power as the B2 back and head system, however, it boasts a newly designed battery that enables you to power the unit while it is charging – a much-requested feature from B2 users.

This means that if you’re working in a studio, you can plug the B10 into the mains power and it will trickle charge while you’re shooting. The new charger has a handy velcro attachment that can strap to a lighting stand while you charge the head.

A full recharge takes an hour, and the battery will deliver 250 full-power flashes.

Profoto has also designed a removable stand adaptor for the B10, with a standard quarter-inch thread, enabling users to screw it onto a monopod and is it on a boom. The adapter also doubles as a handy trigger grip, and is an immensely useful addition.

The head has a 96% CRI (colour rendering index) LED and it has the ability to change the colour balance from tungsten to daylight (though there is no colour temperature readout) – two key features that make it ideally suited to video shooters.

It is fully integrated with the Profoto Air system, so it can be fired from the A1 and any of the AirTTL triggers, and it will work seamlessly in TTL and HSS with the B1, B2, D2 and Pro-10.

The B10 is available now from  Profoto  in either a one-head kit for £1380 or two-head kit for £2,760. The single head is presented in a form fitting clamshell case, while the twin kit comes with a usefully designed backpack that has room for a 15-inch laptop, two B10s, two smaller bodies (think Sony A7 size) and two lenses.

In addition to the B10, Profoto has also launched a new (and free) app. Currently available for iOS devices, with an Android version due to follow, the app will become a key part of the whole Profoto system going forward.

Obviously its primary purpose is to control the light (power, continuous light power, colour balance), and up to three can be connected at once. The Bluetooth connection is remarkably lag-free, and makes the familiar “iPod Geiger counter” clicks as you dial your settings up or down.

You can also capture a photo direct from the app using the B10’s LED to illuminate your image, which should be useful for behind-the-scenes shots or Instagram posts.

Perhaps the most important function of the app, though, will be to deliver wire-free firmware updates. When you install or open the app, you’ll be notified that there’s a firmware update and you simply tap the button to get it; no more cables, and no more wrestling with new camera firmware interfering with your flash.

It also has a “how to” section that links to the Profoto Academy website, as well as a support section for product issues. We can see how the app will become a well integrated part of Profoto products going forward. Other manufacturers, take note!

15 of the best photo apps: top editing apps for iOS and Android devices