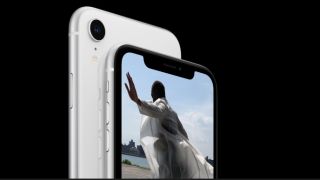 Pre-orders for the Apple iPhone XR have started. The phone was revealed at Apple's last big event, alongside the iPhone XS and iPhone XS Max but we have had to wait a little bit longer for this device.

In a world where three lenses on the back of phones is fast becoming the norm, why then would you even consider something with just one lens? Well, the specs are actually impressive.

It has the same 12MP wide-angle camera (26mm at f1.8) with optical image stabilization for photos and videos - this is a fantastic lens for a camera phone. But it is missing the additional 12-MP f2.4 camera at the back.

Not having this on the phone means you do miss the all-important 2x optical zoom functionality and this camera was a big part of Apple's new portrait mode.

Having that added bit of telephoto functionality meant that there was depth mapping for the portrait shots, which helps determine the bokeh effect (that can be turned up or down on the iPhone XS).

Chip off the old block

The good news, though, is that the A12 Bionic chip is present in the iPhone XR and it is this which houses the computational power to make sure that the iPhone is a world-leading snapper. Alongside this chip is the Imagine Signal Processor which also enhances the images take on the iPhone XR.

According to Apple, you also still get Smart HDR on the iPhone XR, Bokeh depth control (despite the lack of a second lens), great low-light functionality and 4K video up to 60fps. Flip the camera over and there is a 7MP True Depth camera for selfies and the like.

The iPhone XR is out for pre-order now - if you want the best deal, then our friends at TechRadarhave all the information you need.