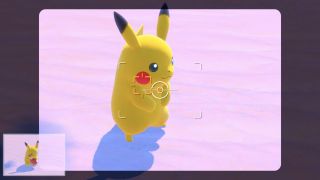 Ever wanted to go on a photographic safari… to take pictures of Pokémon? Well, a new Pokémon-themed photography game is being released for the Nintendo Switch games console that enables you to do exactly that.

New Pokémon Snap has just been announced by Nintendo, and is a videogame that takes you to exotic islands inhabited by wild Pokémon including fan favorites such as Pikachu and Squirtle, as well as newly introduced pocket monsters like Scorbunny from Pokémon Sword and Shield.

The new game sees you hop in a dome-shaped safari buggy, giving you an unobscured view of the environment. As the buggy travels across the terrain, you must spot and snap photographs of the Pokémon that are native to each area.

When you finish each stage, you select your best photos and submit them to your mentor Professor Oak for a photographic critique, where he will score them based on specific factors.

Some scoring is based on capturing shots of Pokémon exhibiting special behaviors, some related to the rarity of the subjects you’ve shot, and some are based on your photographic skill, such as capturing subjects as large as possible in the frame (though clearly Professor Oak needs to watch our What is the rule of thirds? video, as he doubles your score if the subject is in the center of your composition).

New Pokémon Snap is the sequel to the beloved Nintendo 64 game Pokémon Snap, which came out over 20 years ago. Fans have been clamoring for a follow-up ever since the original was released in 1999, but Nintendo always insisted that it would need to add a “very unique twist” before that would happen.

“All I can say is that I don’t think we can just make the same thing again,” Pokémon producer Junichi Masuda told Metro last year. “So we’d have to come up with a very unique twist on this if we do make another one.”

So what could that unique twist be? The obvious one would be the ability to freely roam the environment. The Nintendo 64 original was an ‘on rails’ game, which means that you follow a predefined course (as if you were on the rails of a roller coaster or haunted house).

If New Pokémon Snap enables us to take our virtual cameras and roam around the islands, peeking under rocks and over cliff edges and up trees to spot pocket monsters, that would be a very welcome addition.

No release date has been given, but it would certainly make a great gift for the upcoming holiday season…