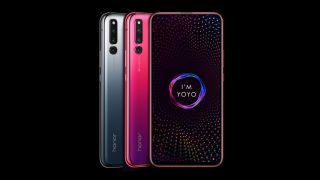 The Honor Magic 2 has arrived and wants to be the camera phone to beat, with the handset cramming six lenses on to its chassis. Yes, six. That's one up on the five-camera array of the stunning Nokia 9 PureView.

There we were just getting used to having three cameras to deal with on a phone - the Honor Magic 2 adds a few more, using a retractable screen section which means there's no notch on the front of the device.

When the phone's front camera bit does retract, it reveals a three-lensed 16-megapixel front camera.

Flip it over and there's a  24-megapixel monochrome lens (as seen on the Huawei P20 Pro), another 16MP camera and to round everything off an ultra wide-angle lens.

These optics read like a mashup between the Huawei P20 Pro and the recently released Huawei Mate 20 Pro (Honor is a sub brand of Huawei).

As this is an Honor phone, the camera has AI smarts and will be able to differentiate between 60 subject categories. There's in-screen fingerprint detection, face scanning and it uses the Kirin 980 processor.

The Honor Magic 2 will launch 6 November but the annoying news is its China only at the moment.