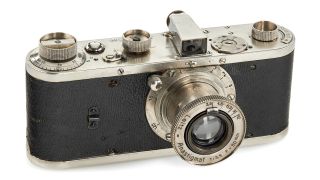 A stunning and rare Leica 0-Series prototype, valued at up to $1.08 million, is the headline attraction of the upcoming 36th Leitz Photographica auction, set to take place in Vienna on 13 June 2020.

Such is the rarity of this prototype – one of only three in existence – that it seems guaranteed to break the auction's "magic price barrier" of one million euros (as was the case last year, when the Leica MP black paint No. sold for an astonishing €1.02 million (US$1.13 million / £861,233 / AU$1.66 million)).

According to the Leitz Photographica listing, this camera – which featured in the revised edition of Leica: A History Illustrating Every Model and Accessory (available at Amazon) – sits between the Ur-Leica and the first 0-Series production models, and represents the technical development from prototype to final product.

Before achieving its finished form in around 1938, this model functioned as a test camera for years. As such it received numerous modifications, including the replacement of the original type folding finder with a tubular design. Its lens is believed to be a BK 50/II from between 1920-21, an early 5-element design.

As always, the 36th Leitz Photographica auction features all manner of rare and esoteric Leicas including the Leica M2 grey paint betreibskamera (valued at up to €500,000), the Leica M2 black paint "Walker Evans" (€50,000) and the gaudy gold-plated Leica M6 gold "Sultan of Brunei" (€35,000).

For more information (including bidding details, if you're brave), visit the official auction website.

The best Leica cameras in 2020: from classic rangefinders to modern mirrorless
THIS is why Leica is so expensive
Leica SL2 review