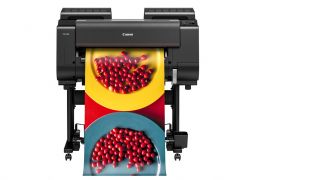 There are printers - and then there are large-format printers.  And if you are a photographer looking to create a giant print for a client, then chances are that you will know that Canon are one of the biggest names in the big photo print game. And it is now updating three of its largest printers.

Of these, the most manageable, and the most likely to be used by commercial photographers is the Canon imagePROGRAF PRO-2100 - which is an update to its imagePROGRAF PRO-2000. This is again a 24-inch printer - which means it can print on rolls that are up to 24 inches (60cm) across, using a 12-color pigmant ink system.

Key improvements to the new model are a larger information display, that can show the type of paper being used, and and new physical buttons that allow you to quickly 'Load', 'Feed' and 'Cut'

The printer can now detect the type of paper being used from its database - speeding up changing between rolls. A stronger motor has also been employed to help with using thinner media types - and there is a clearer front window at the front of the unit to show the internal workings.

Also new are the even larger Pro-4100 and PRO-6100 inkjet printers, which boast 44inch and 66inch printing heads respectively.