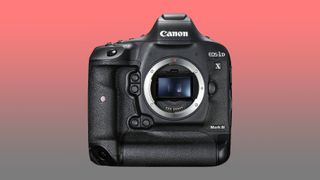 A set of leaked specifications for a prototype of the Canon EOS-1D X Mark III have been leaked, revealing such details as a 28.1-megapixel sensor, 30 frames per second burst shooting and in-body image stabilization.

As of yet, no video specs for the Canon EOS-1D X Mark III have been revealed, though it is possible that video recording may not be finalized (or possibly even enabled) in this early unit.

The leak was shared by sites like Canon Watch, and are about on par with what was expected of Canon's of next flagship professional camera:

• 28.1mp full-frame CMOS
• Up to 30fps still shooting
• Dual Digic 9 (would be the first time the EOS-1D series would introduce a new processor)
• IBIS
• New and larger rear LCD, the source said it looked brighter too
• February announcement

While the big takeaway at first glance is the relatively modest 28.1MP sensor, it's important to remember that a larger sensor isn't the reason that the target audience – working professionals – are going to want this camera.

Far more important is the continuous shooting speed – and this is the real takeaway for pros, as the 1DX Mark III apparently has a huge 30 frames per second capacity. That's no doubt made possible by the alleged brand new Digic 9 processor – a pair of them, in fact, working in stereo to process files that much more quickly.

And of course, the introduction of in-body image stabilization is a massive development for the flagship DSLR – something that we know will be reflected in Canon's mirrorless bodies in due course.

Video specs aren't mentioned but, given that the Mark II features 4K at up to 120fps, it seems a shoo-in that the Canon EOS-1D X Mark III will feature at least the same – although previous reports asset that it may shoot uncropped 6K video.

Obviously all these specs are subject to change, with this being a prototype camera, and it's also possible that they might be entirely false. However, given that we know the 1D X Mark III is being actively field tested ahead of the 2020 Olympics, everything does seem to add up.

With Sony having just announced its own flagship camera, the Sony A9 II, all eyes are now on the Nikon D6 to see how it stacks up against its pro-grade rivals.

The best cameras for professionals in 2019
Sony A9 II flagship breaks cover but the upgrades are evolutionary
The Nikon D6 is coming! Nikon announces its new flagship DSLR is in development