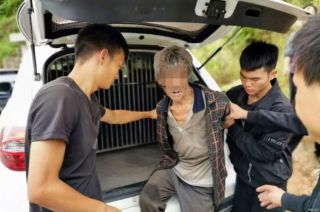 Camera drones aren't just creative tools in a photographer's kitbag - it turns out that they can also be used to find fugitives who have been on the run for 17 years. Chinese police have arrested Song Jiang, a 63 year old escaped prisoner who had been living in a remote cave that was totally cut off from human interaction.

He had originally been jailed for trafficking women and children, but had escaped from the prison camp he was imprisoned at in 2002. Although it's unclear how long exactly he'd been doing so, he'd been living in a cave in the mountains in the Yunnan province in south-west China for some years.

The BBC have reported that the Yongshan police received clues about Song's location in early September, which lead them to the mountains behind his hometown in the Yunnan province.

Initial searches failed to find Song Jiang, so authorities decided to apply for additional camera drones to help them find the fugitive. After five hours of low-altitude investigation, the camera drones spotted a blue-colored steel tile on a steep cliff as well as traces of household rubbish nearby.

After they discovered Song's hiding spot, the police then hiked for over an hour to find him in a cave that local media described as being less than two square meters wide. According to the police's WeChat account, the man had been living in seclusion for so long that he struggled to be able to communicate.

After being taken back into police custody, Song Jiang confessed to escaping from the labor camp and was sent back to jail to resume his sentence for women and child trafficking.

Camera drones have been used to find people for years, with countless Search and Rescue teams across the world using drones to help save hikers when they've become lost or injured. Police forces in a variety of countries have also been keen adopters of camera drones as well. With the ability to gain an entirely new perspective, and even use thermal aerial imaging, it's clear that drones are more than just creative cameras, they're also incredibly important tools.

10 best camera drones in 2019: these are the best drones for photography
Best drone accessories: essentials for your DJI drone and other quadcopters
Best drones for beginners in 2019