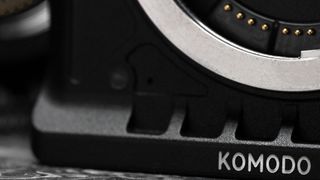 Ever since the EOS R was first announced, Canon has continued to handicap the video capability of its otherwise formidable RF mount system. That's about to change, however, with a new video-oriented RF-mount camera – the thing is, it's not from Canon.

Instead, Red Digital Cinema will make use of the mount on its upcoming Komodo system, about which very little is known – other than the fact that it uses Canon's full-frame mirrorless RF mount.

That's according to a series of highly cryptic teases from Jarred Land, president of Red – the manufacturer of specialist 4K cinematography cameras.

The Red Komodo was mentioned in passing by founder Jim Jannard's reveal of the Red Hydrogen 2 camera phone, with an enigmatic Instagram post by Land simply stating "We be listening.... ;)".

Following speculation as to what it all meant, Land then took to the Red User forums to further explain what Komodo is – or, more spefically, what it isn't.

"Between my Komodo Cfast photo last week and Jim's reference in the Hydrogen thread there has been a ton of speculation of what Komodo is, and it sure is fun to watch imaginations run wild.

"I told everyone that I wouldn't reveal Komodo until it was ready.. There still is a bunch of time before the first batch starts shipping towards the end of the year and everything can and probably will change. But in the spirit of discovery... perhaps I can still stay inside those rules and tell you what Komodo is not :)"

So here's what the Red Komodo definitely isn't:

However, we do know one thing it definitely is: a Canon RF-mount system. And we know this because Land shared the above photo of the Komodo, clearly depicting the RF mount (distinguishable from the standard EF mount due to the additional electrical contact on the camera's right-hand side).

What could Red Komodo actually be, then? Land's comment that it won't cost under $5,000 unless you own a Hydrogen suggests complementary function between the devices. News Shooter speculates that it could be similar to the Z Cam system.

"If I was to guess, and this is just pure speculation, I would say that Komodo is going to be some sort of Z Cam competitor. Probably S35, probably limited resolution (4,5 or 6K), Canon EF mount RF Mount, CFast recording, headphone, and a 3.5mm audio jack. I would also think that monitoring and control will be done through either the Hydrogen One or Hydrogen Two."

While Red products are notoriously prone to delays, meaning it might miss its projected end of year ship target, but Land added, "Komodo is alive and breathing and you will probably see it pop up over the next few weeks and months in the hands of some very talented people," so more details should start leaking soon.

Camera rumors 2019: what new cameras are coming out this year?
Canon EOS R review
Canon RF lens roadmap: everything we know so far