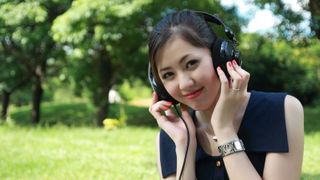 If you thought podcasts were a thing of the past, think again. Podcasts may be a product of the iPod era, hence the name, they are increasingly they way people use their free time to listen to on their mobile phone, tablet or laptop.

Recent deals like Spotify's purchase of podcast producer Gimlet Media for $230 million mean that money is flooding into the sector, and standards are rising across the board. Indeed, many are predicting we're about to enter a golden age of audio.

Like streaming video, though, the only problem with podcasts is finding the quality content amongst a sea of dross. So in this post, we've done the work for you and curated the very best podcasts for photographers available today.

And the best thing is, they're all entirely free to stream or download.

Podcast Scenario is a series of audio documentaries that each go behind the scenes of a specific photographer.

Two things make this podcast stand out. The first is the professionalism of its production, which is equivalent to a show on say, America's NPR or the UK's Radio 4. And the second is the fascinating and inspired choice of projects.

To date, there have been six episodes, each between half an hour and an hour long, featuring photographers including Clare Hewitt, who takes landscape shots for her pen friend on Death Row; Lewis Khan, who has an artists' residency at Chelsea and Westminster hospital, where he takes taking images of staff and patients; and Jennifer Balcombe, whose long-term project focuses on her brother's physical changes throughout gender transition.

A Photographic Life is a weekly podcast by photographer, writer, lecturer and filmmaker Grant Scott, where he discusses the latest news, themes and issues surrounding the photographic community.

The informed and intellectual tone is the thing that really makes this podcast distinctive. If you're looking for quick and easy shooting tips or camera reviews, you'll need to head elsewhere. But if you're looking for thoughtful discussion about photography and life, informed by experience, this is the podcast for you.

Film's not dead, and here's the podcast that proves it. Hosted by Ade, Rachel and Graeme, Sunny 16 explores the world of analogue photography in all its forms.

The show features interviews with everyone from authors to artists, gallery curators to film lab owners. For example, the latest episode at time of writing (139) features Ethan Moses, who talks about his many products, including Cameradactyl 4×5 cameras and the Buttergrip, and the challenges facing anyone trying to manufacture cameras.

The show, which varies in length but can often run to over 90 minutes, also covers the latest news, listener feedback and whatever else is on the presenters' photographic minds at the time. Overall, there's a bright and breezy tone to this show that's infused with the hosts' obvious passion for their subject.

Launched in 2016, this podcast is specifically focused on landscape and travel photography.

The tone is relaxed and chatty, and it all adds up to an easy listen that's nonetheless  informative and often inspirational.

5. A Small Voice: Conversations With Photographers

This fortnightly podcast delivers exactly what it promises in the title: in-depth, high quality interviews with a diverse range of world-class photographers.

Smith works as a pro photographer but he originally trained as a journalist, and it shows in the professionalism of his interviews, which are always on point and cut right to the heart of the matter.

Process Driven is a show about creativity that's currently on its 27th episode. In each instalment, host Jeffery Saddoris engages in frank, in-depth conversations with creators from a wide range of disciplines, to talk not only about the 'what' and the 'how', but also the 'why'.

Photographers are well represented in the archives, with past shows focusing on well-known names including Kevin Mullins, Ondřej Vachek, David DuChemin, Kristopher Matheson and Simon Baxter.

Most episodes last around an hour, and Saddoris does an excellent job of breaking down people's creative process; in a way that both inspires you and leaves you feeling like you've actually learned something.

Presented by Tyler Stalman, The Stalman Podcast looks at photography, cinematography and technology, and the intersections between them.

The discussions can get pretty nerdy, but even when the talk gets super-technical, Stalman's innate charm and sense of positivity carries you through and keeps the tone light and entertaining.

Since 2017, its creators have posted 51 shows, which typically run between one and two hours long. Recent topics include a review of the year's best gear, how to make money from video, and when and why you should upgrade your kit.

Hosted by Glyn Dewis and Dave Clayton, He Shoots, He Draws looks at the worlds of creativity, photography, graphic design, business and life. Each week, they chat about the things they admire, the people that inspire them, and what they love and loathe in the industry.

Recent guests include Sue Bryce, Matt Pereira and Vincent Versace. Episode lengths vary hugely, from as short as 20 minutes to as long as an hour. This is, in part, a reflection of the laid-back, relatively unstructured approach the genial hosts, who have been friends for eight years, take to podcasting.

But don't be fooled by this casual attitude: these two guys really know their subject, and once they get their teeth into a thorny subject, they can come to some quite insightful and compelling conclusions.

Another podcast focused on analogue photography, this bi-weekly show sets out to inform, engage and inspire film shooters, both novice and professional.

Hosts Matt Marrah, Leslie Lazenby and Michael Raso share product reviews, tutorials, and tips in a way that deconstruct complex topics without dumbing down the content. Episodes are typically between 45 minutes and an hour long.

Launched in 2009, Film Photography Podcast has become the focus for a worldwide community of film enthusiasts, complemented by its YouTube Channel, newsletter, Walking Workshops and School Camera Donation Program. In short, a must-listen for any enthusiast for analogue film.

The presenters chat about what it’s like to run a photography business today, and to guests about their own experiences and takeaways. Recent interviewees have included wedding and family photographer Chloe Ramirez, Janine Esbrand from Lightbox Coaching, and branding expert Clare Yarwood-White.

With most episodes around 60-90 minutes long, the bright and breezy hosts really get under the skin of the issues discussed. It's not often that most of us sit down with another photographer and really grill them on how they run their business, so this is essential listening for any entrepreneur in the industry.

Graincast comes from what might be seen as the purest form of podcasting. Basically, three friends sit down to chat about photography and how it matters to them; nothing more, nothing less.

Currently on episode 37, the show's discussions are laid-back to the extreme; frequently rambling and often shooting off on wild tangents. Episode lengths vary wildly, and can clock in at anything from 30 to 90 minutes.

If you're looking for a structured podcast about photography with formal learnings, then, forget it. But if you like the idea of intruding on what's more or less a private chat - between men who are passionate about their subject, but who never take it too seriously - this irreverent show is well worth checking out.

Available as both a video and audio podcast, Picture This sees professional photographers Chelsea and Tony Northrup dig deep into the history, technology, and personalities of photography.

Launched in 2016, this slickly produced weekly show offers unbiased reviews of cameras and insightful advice on technique, from two presenters who really know their subject, and show unceasing enthusiasm for it.

Recent topics include '5 Lies Camera Companies Tell You', a discussion on plagiarism, and the proposition that 'The Photography Community is Toxic'.

Episodes are usually about 20 minutes long, with recent discussions including 'Sometimes you need to eat s#@t', 'Screw your dynamic range excuses' and 'Photo retouching has gone too FAR!!!!'.

As you can probably tell from the titles alone, shockjock Polin doesn't beat about the bush, and has clear views that he expressly keenly, loudly and often with expletives.

14. The Art of Photography

Ted Forbes and Jaron Schneider are possibly the hardest working hosts in photography podcasting, with their thrice-weekly show currently on episode 300.

Every Sunday, Wednesday and Friday The Art of Photography brings you the latest news, details of photography shows, and features on topics such as techniques, composition, philosophy, craft, digital photography, film and darkroom techniques.

Episodes are typically an hour long, and recent talking points have included 'Why aren't cameras MORE expensive?', 'What is art any more?' and 'The Toxicity of Rumour websites'.

You're probably already aware of the photo news site Peta Pixel, but did you know they also did a podcast?

Hosted by Mike James, a retired newspaper photographer and magazine editor, this twice-weekly show fuses together news, opinions, humour and real-world experience to help you stay up to date with what’s going on in the photo industry.

Now up to episode 313, Peta Pixel Photography Podcast is a great listen for anyone wanting to improve their photography - and especially if you're looking to upgrade your kit, as James gives detailed and unbiased reviews of the latest tech that will help you understand whether it's worth buying or not.

Launched in 2008, This Week in Photo is one of the longest running photography-centric shows in the industry.

Hosted by Frederick Van Johnson, the audio and video podcast centres around a weekly round-table discussion of the major developments in the world of photography, along with one-on-one interviews with big name photographers and companies.

With the show reaching episode 556 at time of writing, recent discussions include how to influence photographers, the psychology of photography, and the truth about photographic gear.

Hosted by wedding photographers Andy Hudson and Steve Grogan, the Photographers Keeping It Real podcast began in 2017 and has since spawned seven episodes.

With the aim of "celebrating the world's best documentary wedding photographers", the format is basically two mates bantering and reminiscing about their wedding experiences, with the occasional guest thrown in.

Most episodes run to between 45 and 90 minutes, and the ironically awful theme song at the start should tell you everything about the tone they're going for.

If you're looking for more of a slightly more businesslike podcast about shooting weddings, then check out Photographers On Fire, hosted by wedding photographer Simon Biffen.

The show aims to bring you "inspiring interviews with awesome wedding photographers", in which Biffen finds out how they run their businesses, from SEO to shooting. His style steers a good line between being relaxed and chatty, while still getting the answers he needs from his guests.

There only seem to be four episodes available online right now, but each is well worth a listen for anyone running a photography business.

The two presenters are very open and honest about their creative process and their business practices, and the conversational tone makes you feel like you've just sat down with them in a bar or cafe.

Topics covered are neatly summarised in the episode titles; for example, 'The one about Nikon mirrorless and making money from single card slots'; 'The One About Dieting, Buying Fake Followers, And Secret Projects'; and 'The One About Solo, Queer Eye, And Nikon Mirrorless Realities'.

In this weekly podcast hosted by Matt Bowen, world-class photographers reveal their personal stories and inspirations.

Bowen asks guests such as Gregory Crewdson, Jose Villa and Paris Gore questions like: what drives them to produce the best photography in the world, how do they market themselves and if they weren't a photographer, what would they be?

With a typical episode running to between 30 and 45 minutes, the Phototypes interview style is very professional and journalistic, and the answers always revealing.

• The 20 best TV shows about photography