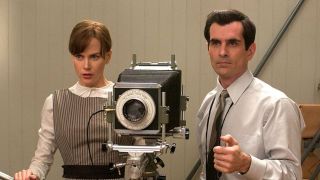 Biopics of famous photographers are a bit like London buses. You wait ages for one, and then several come along at once.

So right now, Tom Hardy is lined up to play iconic war photographer Don McCullin in an adaptation of the war photographer's autobiography. Kate Winslet is set to star as Lee Miller, the famed American photographer, model and artist who brought images of the Nazi concentration camps to world attention. Jennifer Lawrence has agreed to portray Lynsey Addario, the award-winning photojournalist, in Steven Spielberg’s forthcoming It’s What I Do. And the list goes on…

But you don’t have to wait for these in-progress movies to hit your local cinema. There are already loads of great photographer biopics and documentary films for you to sink your teeth into. In this post, we detail the best of the best; listed alphabetically and divided between dramatisations and documentaries.

Meanwhile, if you're looking for fictional films where the main characters carry cameras, check out our list of Top 25 movies about fictional photographers.

Born in 1904, Margaret Bourke-White was both the first foreign photographer to take pictures of the Soviet five-year plan and America’s first female war photojournalist. She even provided the cover image for the first-ever issue of Life magazine. Farrah Fawcett gives an excellent (and award-winning) performance as Bourke-White in this well-paced biopic, which intertwines the story of her career with that of her rocky relationship with her second husband.

This British-made drama focuses on the real-life experiences of two photojournalists, Cambodian Dith Pran (1942-2008) and American Sydney Schanberg (1934-2016), during the rise of Cambodia's Khmer Rouge. It uses a more stark and documentary-style of film-making than a typical Hollywood movie, and is all the more emotionally engaging and disturbing because of it. Plus, without giving too much away, there’s a scene around the development of a piece of film that anyone from the analogue era will find both heart-stopping and fascinating.

Everyone knows that Sir Arthur Conan Doyle wrote the Sherlock Holmes novels, but did you know he also believed in fairies? That’s because he was duped by a series of five fake photographs taken by Elsie Wright and Frances Griffiths, two cousins who lived in Cottingley, near Bradford, England. This movie takes "inspiration" from this true-life story, rather than relating it particularly accurately, but it's an entertaining romp nonethless. And more broadly, it does a good job in showing how photographic manipulation is nothing new, nor specific to the digital age.

American photographer Diane Arbus (1923-1971) was chiefly known for her work documenting marginalised groups such as dwarfs, giants, transgender people, nudists, and circus performers. This drama based on her life is thoroughly entertaining and moving stuff, and Nicole Kidman is terrific in the main role. Don’t treat it as fact, though: the story is mainly fictional, and the Diane Arbus estate refused to give their approval as a consequence.

Everlasting Moments is a Swedish drama based on the true story of Maria Larsson, an uneducated, working-class woman who, in 1911, won a camera in a lottery and went on to become a professional photographer. Narrated by her daughter, it's a classic tale of triumph over adversity and doggedly pursuing what you love; all the more affecting for being based on a real person.

The Bang Bang Club was a group of four conflict photographers active within the townships of South Africa between 1990 and 1994: Kevin Carter, Greg Marinovich, Ken Oosterbroek, and João Silva. This Canadian-South African movie adapts an account of their work written by two of its members, and depicts the extremes they went to to capture their pictures. While it's been criticised for not delving deeper into the politics of the era, as a dramatisation of the realities of life as a conflict photographer it’s a stunning achievement.

This British movie relates the real-life affair between photographer David Bailey (Aneurin Barnard) and model Jean Shrimpton (Karen Gillan), while on a one-week assignment in New York for Vogue in 1962. The film-makers went to great pains to recreate the photos from the original shoot, using a combination of props, and computer-generated imagery. And the film also nails the central narrative, showing effectively how the pair's efforts turned the staid world of fashion photography upside-down.

This biopic of Dennis Stock (1928-2010), a photographer for Life magazine, focuses on his friendship with the actor James Dean (played by Dane DeHaan). With Robert Pattinson in the lead role, this is a highly personal film that highlights the tension between photographing someone on a job and treating them as a friend, two things that can often come into conflict with each other.

Born in Prague in 1935, Jan Saudek is one of the most famous photographers his nation has ever produced. Fotograf is based on his life and work, but only loosely; it's far from a straight biopic. Instead this Czech-made ‘dramedy’, which stars Karel Roden and was co-written by Saudek himself, strides a fine line between veracity and irony. In doing so, it avoids the heavy-handed plodding that biopics are typically prone to, and the result is quirky, yet satisfying.

This Canadian indie tells the tale of Eadweard Muybridge (1830-1904), the pioneering photographer who in 1872 famously took 12 still images of a horse galloping and combined them in a prototype film reel, to prove that all four feet leave the ground at the same time. Muybridge was also well-known for shooting nude and deformed subjects, and for killing his wife's lover, so there's plenty of true-life material to ensure this biopic never flags. Michael Eckland gives an excellent performance in the title role, too, and while the weird score and offbeat humour can be irritating, overall this is a very entertaining and informative watch.

American photographer Robert Mapplethorpe (1946-1989) was one of the first to convince curators that photography could be considered art. But what he'll inevitably be best remembered for is the way incorporated male genitalia, homoeroticism and BDSM subculture into his work, in a way that still shocks today. So be warned: there are a lot of penises in this biopic, currently touring film festivals, which stars The Crown actor Matt Smith as the controversial artist. That doesn’t, however, deflect the film from efficiently dramatising the main landmarks in Mapplethorpe’s life, from his youthful relationship with Patti Smith to his untimely death from AIDS. Most admirably, it avoids oversentimentalising a man that even friends and admirers said could be "difficult".