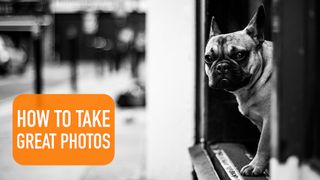 Missed the first part of this series? Click here

Over the following weeks, we’ll be showing anyone how they can take great photos.

In the first part of this series, we examined light. This time around, we’re looking at what the light illuminates: your subjects.

To some extent, the subjects we select really depend on what it is we’re trying to achieve. What means something to one person may be completely irrelevant to another, and sometimes it’s plain, everyday subjects, rather than particularly exciting ones, that can make your photography stand out more – more on this later on.

When you further consider that the context in which an image is viewed can have a significant effect on how it’s received, you can probably start to appreciate that there aren’t necessarily good or bad subjects as such. Does this mean we should just go out and shoot anything and everything? Not at all. Perhaps the best place to start is to choose a subject that means something to us.

Taking an image of a loved one, a place you’ve trekked days to visit, your favourite band, or something you yourself have in some way created makes for an image that can hold infinitely more appeal than would otherwise be the case. Even if the image fails on one or more technical levels, it’s the fact that we have a particular connection with its contents that makes it all the more meaningful.

Most of the images we see of politicians, celebrities or other recognisable faces may be technically sound but, at the same time, somewhat dull. We're more likely to notice images of people to which we have some kind of emotional connection – our favourite singer, comedian or footballer – but if we analyse the technical merits of the image itself, we may not find too much to praise.

The photographer may have simply been tasked with capturing them for a feature or article, rather than encouraged to do something different. And yet, if you think about the most famous celebrity photographers – Rankin, David LaChapelle and so on – you’ll notice that they may be capturing the same people as other professional photographers, but its the creativity behind them, perhaps the use of an unconventional environment, pose or prop, that separates them from a sea of others.

Some images are more effective because of when they are taken and viewed, particularly after a significant event or during a period of political, economic or social uncertainty.

There may well be of an issue that is in some way personal to you too, such as a march in the name of a particular cause, or a protest of some kind, and this can draw you into trying to capture and communicate that particular event. The unpredictability of such events means that the photographer can be rewarded quite easily here, but we're so used to seeing such images in the media that it pays to stay alert and seek out opportunities in order to create something that is genuinely different.

One thing to bear in mind is that the kinds of images that end up standing out – those that go viral, for example – rarely do so because of technical excellence. Rather, it's the fact that the photographer has managed to capture something that resonates with enough people. This is harder to achieve, but ask yourself this: would you rather end up with one great image from such an event or ten average ones?

Just as we can use photography to communicate serious issues, we can also use it to put a smile on someone's face.

Again, while technical excellence is desirable, it's more key in a landscape or portrait than it is here. Instead, it's really about finding the correct subject or perfect moment, and thinking outside the box rather than sticking to any rules.

From everyday to seeing in a new way

Plain-coloured subject? The easiest way to give it a lift is to shoot it against a colourful background of some kind.

No-one will deny the appeal of an image showing Aurora Borealis, or a super-wide-angle aerial shot of a major city. Photographers plan entire holidays around being able to get to certain destinations at a certain time in order to give themselves the best chance possible of capturing an image they have long had in mind.

We’ve become used to seeing certain things photographed in a certain way, and other things hardly photographed at all. So, when we see something that deviates from this, we immediately notice it.

Cutlery, kitchen utensils, clothes pegs, things you might have lying around in drawers at home ... We may not feel particularly encouraged to take photos from them because they don’t hold as much obvious appeal, but all it takes is a little creativity and technical skill to make an everyday object the focus point of an image.

A macro lens is a useful tool to have for everyday objects as it will instantly allow you to get closer to them than you normally would. Tight budget? Experiment with close-up filters or reversing rings instead.

Take an everyday object as your starting point and start to think about every way but the most obvious one to capture it. Consider shooting it from a completely unconventional angle, perhaps very close up so that you can see details that you otherwise wouldn’t.

Change your depth of field to render some parts out of focus and move the subject (or yourself) to vary the composition. Play with light to create more or less contrast and consider incorporating any shadows into your composition too.

In Part 3, we’ll be looking at equipment