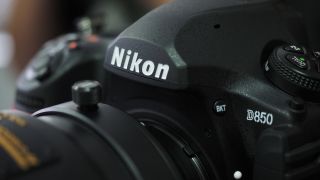 If you are looking for a Nikon Cyber Monday camera deal, then you are in luck - there are some fantastic deals out there are at the moment.

UPDATED: Cyber Monday is here and we have all the best Nikon camera deals in one place. If you don't see anything you like, then keep checking back as we will be updating this guide throughout the day.

Whether you're searching for a Nikon body or lens, we'll help you bag the best Nikon camera you can afford.

The good news is, this is a great time of year to pick up some a discount on Nikon gear.

Here, we’re curating the very best Cyber Monday Nikon camera and lens deals, so you can be safe in the knowledge that you’re making a good investment this November.

Nikon D3500 + AF-P DX NIKKOR 18-55mm VR + accessories $396.95 - save $100
Only just in the market, this is the latest in a long line of superbly built budget DSLRs from Nikon. This deal is £100 under the recommended retail price, and the lowest we have seen this combination at since launch. We highly recommend choosing the camera with this VR version of the lens, rather than the slightly cheaper non-VR zoom which you may also come across. This one-day deal includes a camera case, card reader and memory card.

Nikon D3500 + AF-P DX NIKKOR 18-55mm VR +AF-P DX 70-300mm f/4.5-6.3G ED Lens $496.95 - save $350
Amazing twin-lens deal - and the perfect starter pack for someone who wants to start serious photography - or for student starting a college course. As well as the VR kit lens, you also get a decent telephoto lenses for portraits, wildlife and sports. This kit also includes a memory card, and some other goodies.

Only just in the market, this is the latest in a long line of superbly built budget DSLRs from Nikon. This deal is £90 under the recommended retail price, and the lowest we have seen this combination at since launch.View Deal

Nikon’s D850 is one of the best cameras ever made, and is still the obvious choice for professionals and advanced enthusiasts looking for something that “does it all”. Nikon may be keen to boost sales of the D850 after the recent launch of the mirrorless Z 7 which may be taking some of its sales. You can now save £350 on this professional high-resolution high-speed workhorse - with prices having dropped since Black Friday at both  WEX Photo Video and Jessops.View Deal

Right now at Jessops, you can pick up a Nikon D500 with a saving of around £100 when compared to other retailers. The D500 is a fantastic APS-C camera, offering a range of different features which suit a huge number of different shooting situations. If you’re looking to upgrade from something further down Nikon’s line, it’s the perfect choice. Having been around for a little while, we wouldn’t be surprised to see some more deals in November.View Deal

If you need a lens to go with the D500, it makes sense to buy them together as a kit. The 16-80mm is so much more than a bog-standard “kit” lens, with its wide maximum aperture and its compact and lightweight size and shape.View Deal

Another great all-rounder that makes sense for anybody upgrading from an entry-level body, but doesn’t have a super high budget. You can pick up the D7500 for just a smidge for just £824 using a combination of a £90 price reduction from Jessops and a £185 cashback deal from Nikon. This is a fantastic Black Friday weekend offer!View Deal

N-Photo: 20% off the Nikon magazine

This is the perfect Christmas present for the Nikon photographer... a monthly magazine aimed specifically at the Nikon nut. Packed full of inspirational images, technique advice and gear tests this is the ideal tutor for those who want to improve their camera skills. Each issue comes with a video disc full of bonus tutorials too.  Get 20% off the Xmas pricing using the discount code BLK20 to get the best deal. Deal ends: Monday 26 November

Black Friday and Cyber Monday Nikon lenses and accessories: what we expected to see

We can use similar tactics to try and guess which lenses we might be able to to pick up cheaply with Nikon Black Friday and Cyber Monday deals. Although lens deals are harder to find, there’s currently the following offer at Nikon USA: which gets you AF-P DX NIKKOR 10-20mm f/4.5-5.6G VR and AF-S DX Micro NIKKOR 40mm f/2.8G for the combined price of $499.95.

Black Friday and Cyber Monday Nikon deals: when will they go live?

Right now, both Nikon USA and Nikon UK are keeping pretty quiet about exactly when their Black Friday deals will go live, but last year official deals were released on Sunday 19th November, a few days ahead of the main event.

You can expect some of the bigger retailers, such as Amazon, to start drip-feeding their own Black Friday Nikon camera deals a little earlier – in 2017 they started to appear from mid-November. We expect the same to happen this year.

Photography-specific retailers, such as Wex Photo Video and Jessops are also worthy of keeping an eye on as you may see some deals appearing in such places, too. If 2018 plays out the same way as last year, we should expect Nikon to release its official Black Friday deals from Sunday 18th November, and potentially Amazon and other retailers from Friday 16th November.

When it comes to the best Cyber Monday Nikon camera and lens deals, you can expect to see a lot of them appear from midnight on the day itself. Amazon is very likely to launch Lightning deals throughout the Cyber Monday 24-hour period.

Black Friday and Cyber Monday Nikon camera deals: what we expect to see

Knowing which cameras will see the best Nikon Black Friday deals is tricky, but we can pick up some clues from Nikon itself. In the US, Nikon has a number of great deals on a number of DSLR and bridge camera models, making it a great time to pick up a new camera for somebody just starting out – perhaps as a Christmas present. Nikon USA will be adding more Black Friday deals in due course.

Some of the best US deals already online include:

Meanwhile, in the UK, the Nikon UK website isn’t listing any deals as of yet, while its recent cashback offer ended in the summer. However, if you look at several retailers, a number of key products are being offered at discounted prices – giving us a good indication of what might be slashed even further next month.

The other big question is on everyone’s lips is where, exactly, you’ll find the best Black Friday and Cyber Monday Nikon camera and lens deals this year.

Aside from this page, the best-value deals tend to appear on Amazon, eBay, NewEgg and via Nikon itself. Other photographic retailers, such as Wex Photo Video, Park Cameras, Jessops, London Camera Exchange and more are also worthy of a look, too. We’ll be scouring the web to bring you the very best Nikon Black Friday and Cyber Monday deals right here though, so make sure to bookmark this page and check back in throughout November.