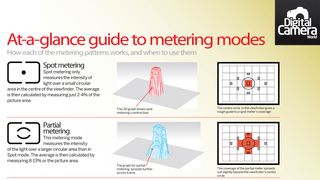 Your camera's metering system is responsible for analysing the scene and judging what settings would capture it best.

Typically, it will look at the extend of darkest areas, brightest areas and everything in between, and work out the aperture and shutter speed that will ensure that everything is kept balanced.

Of course, it should be noted that in-camera meters are far from ideal – they only measure reflected light, which changes according to the scene and what your subject is wearing, as opposed to incident light, which is an empirical measurement that only changes when the actual light changes.

To measure incident light, you need a handheld light meter. Find out more about how to use a light meter (and why not to trust your camera meter!) and check out our guide on the best light meters on the market today.

The default metering option goes by different names, such as evaluative or matrix, but it works on the same principle across different cameras. Out of all the options available it's the least selective, in that it looks at a wide range of areas so that it can provide the best balance for the whole frame.

If you choose to place an AF point over a specific area, however, it will typically bias its reading towards this. This ensures that the subject covered by the focusing point will be exposed most appropriately.

Exactly how well this default option works depends on your camera, but you can generally leave it set to this for most everyday scenes. Sometimes, however, you may be photographing a scene that's a little more unusual, and that's where the other metering modes come in.

Most cameras offer at least two further options, and one of these is called centre-weighted-average metering. This still takes the whole scene into account but it biases the exposure towards the centre of the frame.

This makes it particularly useful when shooting a subject against a background that's much brighter or darker. A typical example is when shooting a portrait where the subject is positioned against a very bright sky.

Ordinarily, the evaluative pattern may underexpose this kind of a scene, as it looks at the brighter parts of the scene and tries to keep these in check, which reduces the exposure for other parts. The centre-weighted pattern has a better idea of what's important.

The other option is called spot. Spot metering is intended for subjects that occupy a small proportion of the frame, as it takes its reading from only around 2-4% of everything you can see on the LCD or through the viewfinder. This could be a person in the distance, a small flower or something else.

Unlike the other two options, however, it only takes this area into account, and disregards the rest. So, it's likely to have a more pronounced effect on the scene as a whole – and you need to be precise with it, too!

A fourth option called partial is also typically available on Canon models. This works on the same principle as spot metering, but it uses a greater proportion of the frame on which to base its calculations.

Recent cameras may also include metering modes designed specifically to protect highlights, which is useful when shooting a subject under a harsh spotlight.

Make sure to come back for more handy photo cheat sheets!

How to use a light meter (and why not to trust the camera meter!)
Best light meters