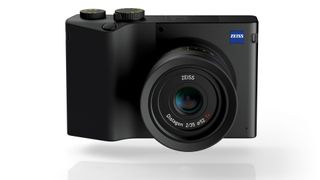 First announced at Photokina 2018, the Zeiss ZX1 is a premium full frame compact camera with a fixed 35mm f/2 prime lens and Adobe Lightroom CC built in. Or it will be, if it’s ever finished.

The Photo Rumors website says it’s due to be “announced soon”, but we’re not so sure – although it is possible we will at least get an update at PhotoPlus Expo 2019, which opens its doors in New York this week.

As we reported last month, a Twitter response from Zeiss suggested the company was still finalizing features based on customer website, and as of today the Zeiss website offers no clear launch date, vague or otherwise, just an email opt-in button for future updates.

We got very excited about the ZX1’s 37MP full frame sensor when the camera was first announced, but that was back in 2018, and a lot has happened since then. 37MP now fees a bit ordinary in a world where 42-61MP sensors are where it’s at.

The fixed Zeiss Distagon 35mm f/2 Zeiss lens might tempt prestige camera buffs, but what we don’t know is how much this differs from to the Zeiss Sonnar T* 35mm f/2 fitted to the Sony RX1R Mark II ('Distagon' vs 'Sonnar'... hmm). The Sony has 42 million pixels and was launched four years ago (yes, FOUR YEARS) in 2015, so apart from its avant-garde styling the ZX1 will need some pretty special features just to catch up with a camera that’s already out there, let alone improve on it.

But the Zeiss ZX1’s secret weapons become visible round the back. First, there’s a comparatively huge 4.3-inch touchscreen display; second, it comes with Lightroom CC built in, so you have powerful editing tools right there in the camera – this suggests the ZX1 is running some version of Android.

Elsewhere, though, the specs look unadventurous. The Zeiss ZX1 will shoot 4K UHD video, but it will have a pretty pedestrian burst speed of just 3fps. And with an old-school contrast AF autofocus system, we’re not expecting particularly snappy responses – it might come with the ideal ‘street photography’ focal length, but will it be fast enough?

So the full frame compact camera sector is an open goal right now, but Zeiss is still fussing around deciding how to put its boots on. How frustrating!