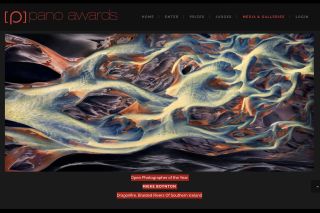 Now in its 10th year, the Epson International Pano Awards showcases the work of panoramic photographers worldwide and is the largest specialist competition for panoramic images.

In the latest contest, professional and amateur photographers around the world were invited to enter the Awards to compete for more than US$50,000 in cash and prizes.

This year the competition received 4913 entries from 1258 photographers in 72 countries, but the overall winner of the 2019 Open competition is Mieke Boynton from Australia – the first female to win the title.

"I travelled to Iceland last year and chartered a Cessna 207 to photograph the spectacular braided rivers," Mieke shares. "As the mighty glaciers travel down the mountains, they grind up the rock underneath, and as the melted water fans out across the river deltas, these suspended rock particles cause a slight milkiness to the water.

The colours alter according to the presence of different elements and minerals such as sulphur and iron, and the endless variations are absolutely breathtaking. It wasn’t until later that I saw the fire-breathing dragon in the photo, but now that I’ve seen it, I can’t see anything else! Nature is truly an artist.

I absolutely love the raw thrill of flying, and to see the delicate intricacy of Nature's Art from 1000-2000 feet above fills me with joy and delight. I travel to remote and inaccessible areas – many of which can’t be photographed by drone – and many of these places resemble giant abstract paintings.

I am mesmerised and fascinated by Nature’s Abstract Art. I am inspired by the photography of Andre Ermolaev and the artistic styles of MC Escher, Wassily Kandinsky, Piet Mondrian and the Papunya Tula artists."

The runner-up in the 2019 Open competition

The overall winner of the 2019 Amateur competition

See all the 2019 winning images

This year's judging panel included some of the world's top panoramic photographers and industry professionals, including Abe Blair, Sean Davey and Timothy Poulton.

The prizes included S$12,000 cash, a Nikon D850, a Himalayan Photography Adventure and an array of shiny Epson goodies.

To view all the winning image galleries, visit the website: thepanoawards.com