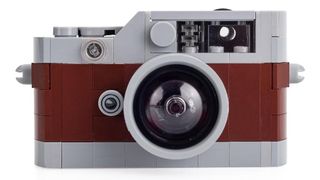 Leica has teamed up with Lego to create a brilliant, blocky recreation of the Leica M.

The new Lego Leica M comes in both black and brown and, as you can see from the images, Lego has done a decent job finding bricks to reproduce the Leica lens, rear display, dial and the like.

There is one big thing missing, though, and that is the Leica Red dot. But we'll forgive Lego given the rest of the camera looks fantastic.

The Lego Leica M is currently only available through Leica's US store and is priced at $45.

This isn't the first time Lego has been used to recreate a Leica. Back in 2013, photographer and Lego builder Chris McVeigh created a brilliant version of Leica’s Hermes edition M9-P out of 114 Lego bricks.

His version looks very similar to what has gone on sale through Leica's official store.