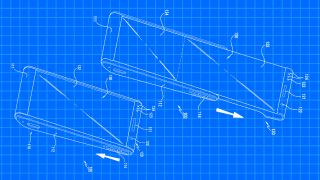 If you thought that folding phones were bizarre, you ain't seen nothing yet. Samsung has patented a new smartphone – dubbed Samsung Galaxy Roll by the internet – featuring a design that unrolls like a scroll of parchment to double your screen size.

Surreal screen design just seems to be how Samsung rolls these days, between the disaster that is the Samsung Galaxy Fold and its previous wacky idea to produce a wraparound phone display.

While other companies might have taken a cue from the folding fiasco and stuck with normal screens that aren't susceptible to so many problems, Samsung has rolled with the punches in a literal way and developed a screen that actually rolls up.

Spotted by LetsGoDigital, the patent for an "electronic device comprising flexible display having expandable display area" was published this month after being filed by the company on 28 November 2018.

The patent describes a smartphone with a flexible screen that can be extended by pulling it out, like a tape measure, and 'stretching' the screen size via a slider mechanism within the phone.

While its most obvious application is for smartphones, Samsung expressed that other uses for the display could be everything from tablets and desktop computers to smart glasses and cameras, and even electronic tattoos. No, we're not sure either.

The idea of a camera possessing a pull-out screen would offer tantalizing possibilities for Live View functionality (though it might make your batteries cry), as well as an intriguing potential solution for situations where you need to quickly approve images without tethering.

The resolution, responsiveness and robustness of such a screen is another matter entirely, but if it ever makes it to market we're fascinated to see what Samsung could do with this tech. If it doesn't break when upon being given to reviewers, of course.