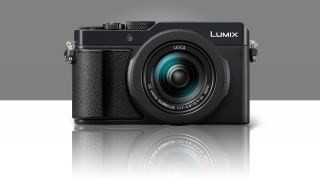 Panasonic Lumix LX100 II
The compact camera market as a whole may be in the doldrums, but the premium compact sector is actually doing rather well. The original Panasonic Lumix LX100 struck a chord with photographers who wanted a big sensor and a fast lens in a pocket-sized camera, and this new version brings the concept right up to date.

There are three key features in the Panasonic Lumix LX100 II’s design. The first is that it uses a  ‘multi-aspect’ Micro Four Thirds sensor, where you can shoot in the 4:3 ratio, 3:2, 16:9 or even 1:1 (square) ratio without simple getting a cropped image. Instead, the camera adjusts the sensor area used for each aspect ratio to keep the resolution largely constant.

The downside is that you don’t get the full resolution of the Micro Four Thirds sensor, even when the camera is set to the 4:3 ratio, but you still get a perfectly usable 17.0 megapixels, thanks to the use of Panasonic’s latest 21.77MP Live MOS sensor. This doesn’t have an anti-aliasing filter, either, promising an even greater resolution advantage over the original 12-megapixel LX100, which was launched four years ago.

The second factor in the original LX100’s success was its Leica DC Vario-Summilux f/1.7-2.8 lens, and this continues unchanged. Panasonic has wisely avoided meddling with a successful lens design by trying to extend its focal range at the expense of its maximum aperture.

The new LX100 II also retains the third of the original camera’s key points – its external exposure controls. You set the shutter speed using a dial on the top of the camera and the lens aperture via a ring on the lens itself. There’s an EV (exposure value) compensation dial on the top too.

The electronic viewfinder now has a resolution of 2764k dots and the rear screen is now touch-sensitive, with both touch-focus and touch-shutter modes.

As well as 4K video, the LX100 II has Panasonic’s now-standard 4K Photo modes, with the ability to capture 8-megapixel images at up to 30 frames per second. This camera has a new Auto Marking option for picking out key moments with movement and face recognition, and a Sequence Composition mode for creating multiple exposure ‘strobe’ effects with moving subjects. This is in addition to Panasonic’s clever Post Focus and Focus Stacking features.

On a practical front, the LX100 II now supports USB charging, which will be a major bonus for travel photographers relying on portable power banks (or laptops) as a power supply on longer trips.

The Panasonic LX100 II goes on sale on October 1st for £849/€949, though it will be available for pre-order before then.