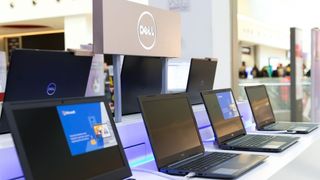 Not to be outdone by Amazon Prime Day 2019, Dell's Black Friday in July event has delivered a bunch more laptop deals which rival the very best you'll find on during Amazon's own sales.

Since these deals only last a day, and are selling out very quickly, you'll need to act fast if you're going to take advantage. We'll be keeping an eye on all the new deals and adding them here as we see them.

Currently, there's a great cross-section of laptops for a range of budgets. Here are our favorite picks from the Dell Black Friday in July event:

We're expecting these deals to be live while stocks last until 23:59, July 16. Dell should be adding more deals in the coming 24 hours, but don't hang around if you want one, since we've seen these sell out quickly.

The best Amazon Prime Day camera deals: everything you need to know
The best photo-editing laptops in 2019: top laptops for photographers