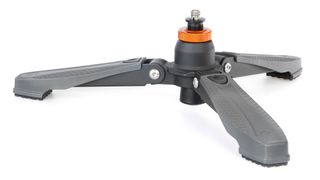 Monopods are great except for one thing: when you let go, they fall over. So British tripod maker 3 Legged Thing launched a Docz foot stabiliser in the summer of 2018 so that its monopods can stand up on their own. The Docz2, just announced, goes a step further by working as a table-top mini-tripod too.

It’s such a great idea – a folding ‘foot’ attachment that screws into the base of the monopod and makes it a free-standing camera support. Obviously it’s not going to be as stable as a tripod, but at least it gives you hands-free operation when you need it and sometimes even the best monopod needs a little extra support.

One tiny detail makes the difference

The ‘old’ Docz attachment had a 3/8”-16 mounting point, which was the right size for attaching to some of Three Legged Thing’s Alan and Trent monopods, but not the removable monopod ‘leg’ in its Leo, Punks Brian, and Punks Corey tripods. These use a smaller 1/4”-20 thread – which also happens to be the thread size of a camera’s tripod socket.

Now you can use it as a free-standing ‘foot’ support for a much wider range of monopods, and you can attach a camera to it directly to use it as a low-level or table-top mini-tripod.

It’s even possible to adjust the position and tension of the ball mount via a rubber foot in the base, though if you want a bit more control over the camera angle you can simply attach a regular tripod head. Most heads use the larger 3/8”-20 fitting (so you can use the bundled adaptor), but some compact heads use the same 1/4”-20 thread as your camera’s tripod socket, so that’s supported too.

The Docz2 will go on sale on July 1st 2019 at £49.99 (US pricing to follow), and Three Legged Thing is also updating its Alan and Trent monopod kits to include the new Docz2. The AlanKit2 will come with a professional carbon fibre travel monopod, while the TrentKit2 includes Three Legged Thing’s ‘ultra-tall’ aluminium Trent monopod. Both monopod kits will be released at the same time.

• The best monopods you can get right now: which should you choose?
• Which is the best tripod you can buy today?
• The best iPhone tripods and supports right now