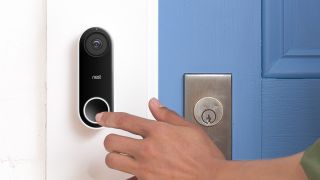 The best video doorbell cameras are a great way of joining the smart home revolution and give you some peace of mind too when you're out of the house. If anyone comes to your door you can see who it is and, in some cases, play back a pre-recorded message.

The key to making a successful smart home product is to replace an existing ‘dumb’ doorbell device many consumers already own, then adding just the right amount of connectivity and extra functionality. The video doorbell camera, in most cases, gets this balance just right.

These devices – sometimes wired, sometimes battery powered – replace your existing doorbell and feature a video camera, microphone, speaker and Wi-Fi connection. With these, they can alert you via your camera phone when someone presses the buzzer, then stream live video and audio to your phone, through which you can speak to the visitor.

What you need to know about Black Friday 2019

The Black Friday and Cyber Monday sales have always been a great time to pick up home security gear. This is when big online retailers bring out their best deals, often for a short time only and while stocks last. So what do we expect to see this year? With Ring being owned by Amazon, and Nest being owned by Google, we would expect some discounts at some point in the holiday sales – but below we track the best prices right now, so that you will always get a decent deal.

They also often feature motion detection and infrared night vision, thus doubling up as a security camera. Prices vary widely, while designs, features and video quality all differ from one video doorbell to another.

Doorbells from Amazon-owned Ring work with Alexa, so the friendly assistant can say “someone is at the front door” on every Echo smart speaker you own, when the button is pressed.

The Video Doorbell 2 is the flagship doorbell from Ring. Arguably the most popular player in the video doorbell market, Ring was purchased by Amazon for $1bn in 2018 and sells a range of different doorbells, as well as smart flood lighting to enhance your home’s security.

This model, the Video Doorbell 2, can either be powered from your existing doorbell wiring, or run off its included rechargeable battery. Battery life can vary quite drastically, depending on how often the device’s motion sensors are triggered, but the lack of hardwiring makes it an easy option for those with limited DIY skills, or who are renting their property.

Ring’s doorbells can work without a subscription, alerting your smartphone when the button is pressed and serving up live HD video and audio within a couple of seconds. However, if you want the doorbell to act as a security camera too, saving footage of motion it sees every day and night, you’ll need to pay for Ring Protect, which starts at $3 / £2.50 per month for 30 days of rolling video storage.

The Video Doorbell 2 is quite a large device, and rechargeable the battery every few weeks won’t be to everyone’s taste (if hardwiring isn’t an option), but for us the Ring offers good value for money and a broad feature set from a name we have learnt to trust.

HDR video and a 4:3 aspect ratio keeps everything in frame

Just like Ring, Nest is a smart home company - this time owned by Google - which has branched out into the nascent video doorbell market. What sets the Nest Hello apart is its HDR video capabilities and a tall 4:3 aspect ratio, which means you can get a better view of whoever is at the door, rather than the usual 16:9 shallow, wide angle view.

The Hello has night vision and motion detection, and facial detection. With that feature, the Hello starts to recognize regular visitors over time then, once you have assigned a name to a face, the Hello will let you know who is at the door, and when the visitor is a stranger.

Like all other video doorbells, the Nest Hello connect to your Wi-Fi network so you can answer the door via your smartphone from anywhere in the world. But, unlike others, the Nest app lets you pre-record messages, then play those (such as one to say you’ll be there in a moment, or are away on holiday) when someone presses the buzzer.

The Nest does not have its own battery, so must be hardwired to your existing doorbell power supply (or a newly fitted one) to function. With Nest Aware, which costs from $5 / £4 a month, video is recorded 24/7 and stored online for five days (more expensive subscriptions allow up to 30-day continuous recording).

Alexa integration on a budget

Another bargain-priced option, this video doorbell by Netvue is powered from your existing doorbell wiring and includes an Alexa skill. This means, once connected to your Wi-Fi network and smartphone via the Netvue app, you can hook it up with Alexa to view the camera’s live video feed on an Amazon Echo Spot or Echo Show.

Video quality is 720p HD, and there’s all of the usual features like two-way audio, infrared night vision and motion detection. Netvue also offers a long 14 days of free cloud storage, meaning anything the camera records can be viewed for up to a fortnight, for free.

An indoor chime is included, so the doorbell can be used just like any other - handy for members of the household who perhaps aren’t interested in using the smartphone app, and just want the device to function like a traditional doorbell.

But for the extra cost, buyers get a professional-grade device which is designed to sink into the wall, resulting in a flush finish. The faceplate can be changed to suit the style of your home, and power over Ethernet means no batteries and no worries over a dropped connection due to patchy Wi-Fi.

As such, this is a good option for readers with a large property, or who live in an older house where Wi-Fi struggles to pass through thick walls. Of course, installing the Ring Elite will require a professional (or advanced DIY skills) due to the need to run an Ethernet cable to your front door. Once installed, the Elite works like other Ring doorbells, with night vision, 1080p HD video, two-way audio, live on-demand video, and customisable motion sensitivity.

The August View is a direct rival to the Ring Video Doorbell 2, in that it is a high-performance video doorbell which is battery-powered and completely wireless. Out-doing most other video doorbells, the August View records video at 1440p resolution, which means 33% more pixels than regular 1080p HD.

At 6,500mAh, the battery is slightly larger than the 6,100mAh pack fitted to the Ring, and yet the August is slimmer. The August also comes with a chime in the box, which the Ring does not - instead, with that doorbell you will only be alerted by your smartphone or Amazon Echo speaker than someone presses the button.

Because August also makes smart door locks, you can answer the doorbell via your smartphone, then use the same app to unlock the door - handy if you need to let in the cleaner, or a family member who has locked themselves out while you’re away. The August View works with a huge range of smart home systems, including Apple HomeKit, Google Home, Amazon Alexa, Nest, IFTTT and Samsung SmartThings.

Crucially, August offers 24 hours of free video storage with its doorbells. This means anything the doorbell records will be available to view on the cloud, via the August smartphone app, for 24 hours after it has recorded. You can then download this and potentially use it as evidence if the camera has caught something untoward. You can upgrade to 30 day storage, for $4.99 a month.

A strong budget alternative to the big-name brands

When it comes to video doorbells, there is a wide range of budget-friendly options from brands not as familiar as Ring and Nest. Not to be discounted because of this, options like the Kobwa offer great value for money if all you want are the basics.

This video doorbell is under half the price of some budget options - but performs in a broadly similar way to its higher-priced rivals. There’s 720p HD video, infrared night vision, motion detection and two-way audio, and a smartphone app for iOS and Android.

This doorbell is powered by lithium AA batteries, which the manufacturer claims can last up to eight months. We suspect this will drop significantly if the doorbell is rung a couple of times every day, but replacing the batteries (which are rechargeable) shouldn’t be too troublesome, especially given the low cost. The device even comes with an indoor chime and a 16GB SD card for storing footage locally as well as in the cloud.