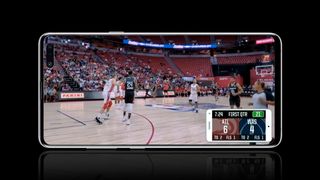 In a historic moment for sports broadcasting, and a coming of age moment for camera phones, the NBA broadcast the first major sporting event ever to be shot entirely on smartphones.

The game was broadcast using 5G technology, with the infrastructure provided by America's AT&T network, and was filmed using an array of six Samsung camera phones – which appeared to be Samsung Galaxy S10 5Gs.

The National Basketball Association's summer league game featured the Washington Wizards, led by rookie sensation Rui Hachimura, coming back from a halftime deficit to down the Atlanta Hawks 76-71.

While 5G broadcasts have taken place before, such as during the PyeongChang Winter Olympics in February and the US Open last summer, this was the first time that consumer camera phones were used to record and air the action.

“The plan is to deliver fans a unique broadcast experience using the same cameras they use every day to capture special moments in their lives,” said Steve Hellmuth, EVP Media Operations and Technology, NBA Entertainment, to Sports Video Group.

I like the up-close sideline view the NBA is experimenting with...I wouldn't watch a whole game this way but certain highlights would look great from this angle. Maybe they could implement it during the playoffs/ nationally broadcast game as an extra camera angle #smartphoneview pic.twitter.com/kmaOPF6nIaJuly 11, 2019

The 'Smartphone View' broadcast was carried as an alternate stream on the NBA's major streaming outlets, International NBA League Pass, NBA TV Canada and the ESPN App. The mechanics of filming using the Samsung phones was handled by the LiveU Smart mobile app.

The NBA has been using its Summer League as a proving ground for new ideas and initiatives. With the new Smartphone View stream having had a successful debut, and offering a different and more informal flavor to the standard broadcast, it could easily make its way into games in the upcoming regular season.

Best camera phone in 2019
Samsung Galaxy S10+ review
What is 5G? And what does it mean for photographers?