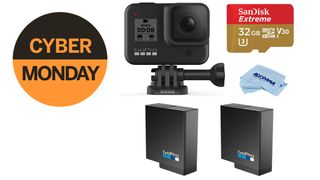 The Cyber Monday camera deals are coming thick and fast now, and this is a fantastic price for GoPro Hero8 bundle. The deal price of $349 includes the Hero8 along with an extra battery, 32GB Sandisk microSD card and a cleaning cloth!

This is just one of many amazing Adorama Camera Deals on photography kit, but you'll have to be quick as the deal ends at midnight on Monday 02 December.

GoPro HERO8 Black bundle with extras: $350 (was $399.99)
Grab the latest iteration in GoPro's popular action cam range with the Hero8, capable of shooting 4K movies and grab a whole host of extras too for $349.99!
US dealView Deal

Take Raw pictures at 12MP or record videos at 4K 60fps with the GoPro's newest Hero8. It has a waterproof build off the bat without the need for an external hard case and also features built-in mounting.

Also touted is a touch screen for a slick operation as if you were using a smart device and 8x slow motion to capture high-action at a rapid frame rate that records every moment.