The PD70 isn’t a device designed to capture amazing video, but one to protect against dishonesty. Given that, it captures more than adequate quality video, subject only to the vibrations imposed by the host. Given it is possible to spend significantly more on a body cam without gaining much in terms of features, we see this as good value.

Boblov offers body cameras for a broad range of users, from emergency services and security agents, through ride-share operators, to consumers looking to document their travels and adventures. The desire to avoid false accusations or frivolous litigation is a common bond, but there are also those who simply want to document their experiences.

The PD70 isn’t the highest resolution camera available, but it does sport all the key functions, putting it in the equivalent of a prosumer spot. It even adds a wi-fi download app and mini-HDMI socket, which definitely extends the offering beyond the basic, though the style and shape suggest a traditional uniform chest.

Whatever your use, is it up to the job?

In terms of physical features, there is a switchable laser light (projecting where the lens is looking) and an IR night mode with illumination.

The camera’s options include stealth mode (no recording indicator), adjustable video lengths (clips are recorded in sequence in case of a memory issue), and a car mode (to act as a dashcam (opens in new tab)).

The PD70 comes in a robust black plastic housing with buttons on the sides and below the screen on the rear. In the plastic moulding are shoe-like mounts, not for a flash but a pocket clip. When in place this obscures some of the screen, but it can be removed reasonably easily (untrue of all Boblov’s models!) Two clips – shoulder and pocket – are included.

The camera itself, surrounded by 6 IR lights for night vision, is plainly visible and built around a Sony IMX117 and ƒ/1.5 aperture which seems to get things about right. The charging and HDMI sockets are tucked under a rubber seal to ensure weatherproofing,

The nine buttons do seem like a lot (probably tricky for gloved fingers on a cold night), but record is well positioned on the top-left side too make it easy to find. The buttons are a bit plasticky, but do the job.

The video is a perfectly serviceable quality, picking up a surprising amount of detail given the bitrate hovers around 12kbps. Assuming that the lens is pointing where you want you should get usable material and the need for higher resolution is questionable.

Video samples:  Shooting during the day, the video reveals every little shake. Here we’re using hands as a gimbal rather than the pocket clip! The after dark footage shows both the IR and standard night modes.

Non-professional users might be disappointed by the camera overlaying all clips with imprinted date and time. This isn’t just metadata (and it depends on the setting of the clock) – it can also be used to add an ID, like an officer number.

We tried installing the ZFXF app on iOS but it was not successfully able to pair with the device, and to be honest we didn’t like the fact it wanted to know our GPS location either. Instead we simply browsed files and transferred them over the Micro USB lead – it might be a retro connector now, but works on Mac and PC without issue. 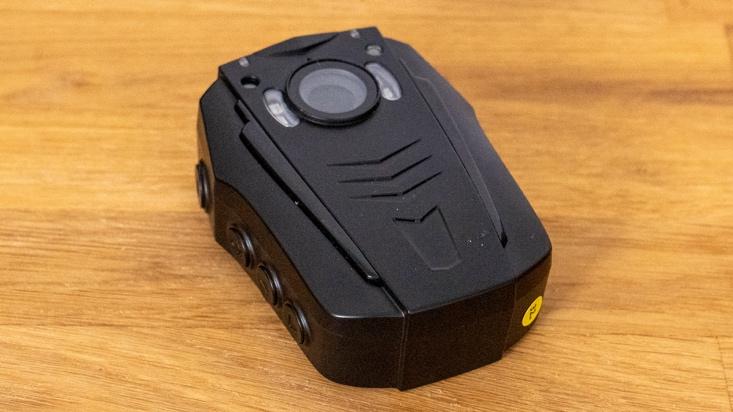 This camera is well suited to its function, not excessively heavy, and comes with some quirky – but potentially useful – extras like the laser. The build balances strength with weight in a way that feels right in testing (though admittedly the battery might not be up to a long shift).

What this camera certainly is not is a budget action camera. Devices like the GoPro Hero 11 (opens in new tab) and DJI Osmo Action 3 are equipped with powerful EIS – Electronic Image Stabilization – as well as being able to shoot ‘clean’ video to swappable cards. If you’re thinking you’ve found a durable solution, you’re wrong.

Compared to a similar camera, though, we feel the PD70 has sensibly arranged controls (we like the separate photo button, for example) and produces good quality recordings night or day.

With over 20 years of expertise as a tech journalist, Adam brings a wealth of knowledge across a vast number of product categories, including timelapse cameras, home security cameras, NVR cameras, photography books, webcams, 3D printers and 3D scanners, borescopes, radar detectors… and, above all, drones.

Adam is our resident expert on all aspects of camera drones and drone photography, from buying guides on the best choices for aerial photographers of all ability levels to the latest rules and regulations on piloting drones.