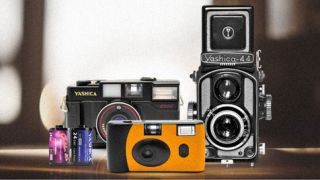 We only have some low-resolution images and video captures from Yashica's Kickstarter video to go on so far, but it does look as if early examples are being used and tested.

Yashica appears to be following the same kickstarter route as the much more established Lomography brand, and is perhaps aiming at the same kind of users. It’s clearly chosen a different direction following its first effort, the digital Yashica Y35, which launched in 2018.

The Y35 was designed to recreate the experience of ‘film’, with a wind-on mechanism to cock the shutter and interchangeable digital ‘film’ canisters with different speed ratings. Our sample failed almost immediately (after two exposures), so we’re hoping the new cameras will fare better. For alternatives you can buy right now, see our best film cameras guide.

From the images and specs we’ve seen so far, the new analog MF-1 looks very much like a regular disposable camera (although we presume it’s not disposable), even down to the specifications. These include a fixed 1/120sec shutter speed, a fixed f11 aperture, a fixed focal length 31mm lens and fixed focus.

The MF-2, not due until August 2019, looks like a more ambitious project, recreating the look of the classic Yashica Electro 35, but with a built-in flash (according to the images we’ve seen so far.

The Yashica-44 TLR isn’t due to arrive until December 2019. It will take 35mm film rather than the 120 roll film format traditionally used in TLRs, but at least it will be easy to get your films developed and printed.

Yashica 400 is a medium speed film likely to be well suited to the MF-1. In the past, this type of film has been a common choice in snapshot cameras with limited exposure controls because of its broad exposure latitude.

Yashica Golden 80s (limited edition) will be a slower, more saturated film, presumably better suited to cameras with a little more control over the exposure settings.

As usual with kickstarter projects, you can make ‘pledges’ ahead of production to secure early delivery or a range of discounts on the final product.