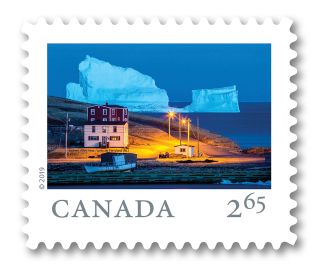 A local photographer from Canada's remote Newfoundland and Labrador province has found worldwide recognition, after his iconic photograph was featured in a series of international postage stamps.

Michael Winsor, a Canon photographer who runs photo tours of Canada's easternmost province, captured the stunning blue hour image of a huge iceberg as it docked off the coast of Ferryland in April 2017.

The towering iceberg grabbed global headlines, and Winsor made the drive to photograph it himself after seeing other people's images posted on social media.

“I wanted to go up there around blue hour, which is just after sunset, because then you get the blue in the sky and things, where the lights just come on," he told The Globe and Mail. "When I turned around the corner I saw it there, just kind of hovering over the houses."

The stamp is now featured as part of Canada Post's From Far and Wide series, which celebrates some of Canada's most spectacular scenes. “It’s pretty cool. “Not very many photographers – very, very few – can say they had their image on a postage stamp.”

It's not just the recognition that's cool; the publicity has also seen an uplift in his photographic business, both in terms of his photo tours and the images he sells online. “I sell calendars and stuff like that internationally… I might buy a roll of these and put those stamps on there.”

How to improve your landscape compositions

Our top wild landscape photography tips to get you noticed