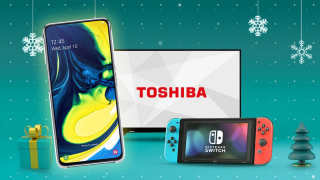 This deal from EE is one of the best that we have seen - as you not only get a mobile phone.... but get a Nintendo Switch thrown in to the mix. It has been running for a couple of weeks now, but we have been told that this deal ends tonight!

Now one of those would be a great gift for someone this Christmas - or a tremendoust treat for yourself. And if you don't want a Switch, then you can opt for a big flatscreen Tosh telly instead.

The essence of this deal is that you get a FREE Nintendo Switch or a FREE 43-inch Toshiba TV when you buy a Samsung Galaxy A80, A70 or A40!

You can't go wrong with any of these three camera phones. The Samsung Galaxy A80 packs a 48MP f/2 main camera, 128GB of storage and possible the coolest ever camera array, which spins hypnotically when you pop it up!

There are plenty more amazing offers to be had, whether you're looking for instax Black Friday deals on instant cameras and film, Canon Black Friday bargains on everything from point-and-shoot to pro cameras, or Black Friday mirrorless camera deals on all the latest bodies from enthusiast to expert.

And stay tuned to our main Black Friday camera deals page where we're collating details of all the best deals we have seen so far...